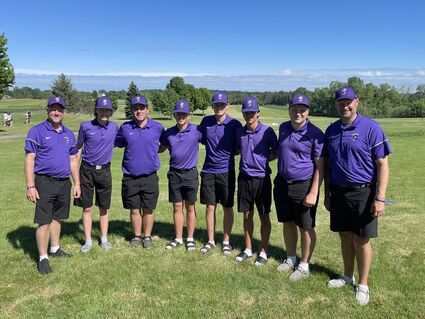 he Cloquet boys golf team made their fifth consecutive trip to the state golf meet held at Ridges at Sand Creek in Jordan last Tuesday and Wednesday, June 14-15.

Hot weather and high winds made play at last week's Class AA Minnesota state golf tournament especially challenging for the Cloquet boys golf team, along with a little less experience on the team than in previous years.

The Cloquet boys, the defending state champions, made their fifth consecutive trip to the state golf meet held at Ridges at Sand Creek in Jordan last Tuesday and Wednesday, June 14-15. It followed a dominant win at the Section 7AA tournament, where the Lumberjacks won by a remarkable 52 strokes. They relinquished the crown at state, taking fifth.

With a heat index registered at more than 100 degrees and winds reaching 40 mph on Tuesday, fairways were hard to hit, said head coach Aaron Young. With putts not falling, the Cloquet team fell into seventh place after the first day, with a total of 332 for its top four players. That left a long hill to climb the next day, at 23 shots behind eventual champion Pine Island/Zumbrota-Mazeppa.

"The boys came out a little frustrated after the first few holes and, unfortunately, were never able to get any positive momentum going with the tough weather conditions," Young said.

The one bright spot was Karson Patten's score of 77, which put the Cloquet junior in a four-way tie for eighth place individually after the first day. A team score of 332 put the Lumberjacks 10 shots out of third and gave them hope for a second-day comeback.

Cloquet came out more confident on Wednesday, led by sophomore Anders Gunelson, who shot an early birdie on his second hole.

"It seemed that momentum had finally shifted in our favor," Young said.

Then a thunderstorm forced a two-hour delay in the middle of the round.

"We had gained three shots on several teams and the boys were feeling positive when play was suspended," Young said.

In the end, there were not enough holes to make up the first-day deficit despite Cloquet finishing with a strong 309, giving them the third-best team round on the day and fifth place overall with 641, one shot behind fourth-place Totino-Grace and 23 shots behind the state champion.

Patten continued his success on Wednesday with an even-par round of 72 for a two-day total of 149, putting the junior in a tie for sixth place. This was Patten's third trip to state, with only one miss since eighth grade due to the pandemic. "I hit the ball better the second day," Patten said.

"Karson has improved his individual ranking each time at state, and with his senior year still to come we are excited for what next year will bring," said assistant coach Kyle Young.

Senior Jacob Walsh was the next-highest Cloquet player, placing 33rd in the two-day event. Gunelson put in a gritty performance, battling back issues both days. Freshman Karson Young - who placed fifth at state last year with a breakout performance - rebounded with a solid second day after struggling Tuesday. 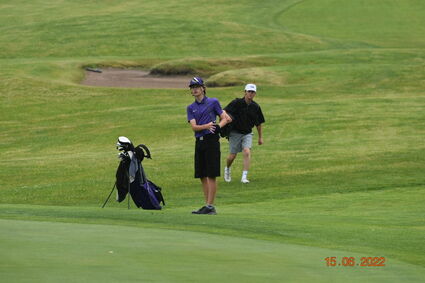 "We had some big shoes to fill this year with half of the team graduating in 2021, and the younger players stepped up. Now we will lose the steady play of senior Jacob Walsh," Kyle Young said. "There is a good nucleus coming back next year, so this was a good learning experience for the players. We will miss Jacob."

Freshman Lance Sayler and sophomore Cooper Ellena also improved on the second day in their first trip to state.

"It was good to see the team not give up after day one," Patten said. "We learned that we are willing to battle when we are down."

A senior next year, Patten said the team thought they had a chance at State. He expects them to do even better next year. "We just need to keep our heads in it," he said. "I know we'll have a chance at winning next year."

Patten is already busy with a summer filled with golf, qualifying for the Minnesota Amateur Championship on Monday, he said. He will travel there in mid-July with former teammates Sam Baker and Keegan Poppenberg.