A long run for Cloquet native 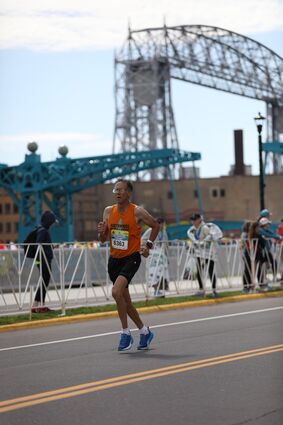 Carlton's Brent Smith (formerly of Esko and Cloquet) gets close to the finish line in Grandma's Marathon June 18. Smith finished the race in 2:58.47, becoming the fastest marathoner ever in the state in his age group of 65-69. Photo by MarathonFoto.com

This year's winners of Grandma's Marathon were Dominic Ondoro and Dakotah Lindwurm, but Carlton County's Brent Smith quietly set his own record, becoming the fastest men's marathon runner in the state for his age group.

Smith actually set two records on June 18. The Cloquet Class of 1974 alumnus - who also set a Grandma's Marathon record in the 65-to-69 age group last year - beat his own Grandma's record and ran the fastest time ever recorded by a Minnesotan age 65 and older. The now 66-year-old Smith raced to a time of 2:58.47, beating his previous record by nearly two seconds.

The retired school teacher and high school coach was - as usual - modest about his accomplishments.

"When you get to the starting line, you kind of have an idea whether it is going to be a good day or a day of survival," Smith said. "On Saturday, you knew the potential was there to run a fast time. The wind, humidity and temperature were all perfect for fast times for all the runners."

While overall age group records have never been kept, it is believed that Smith is the most decorated runner in the history of Grandma's Marathon. According to Zach Schneider, marketing and public relations director for Grandma's Marathon, Smith has won his age group eight times and has finished as runner-up in his various age groups three times. He won his age groups in 2022, 2021, 2018, 2015, 2012, 2011, 2006 and 2005 as well as finishing second in 2017, 2003 and 2002.

Smith's time this year did not come without sacrifice. The longtime Nordic skier and runner puts in 80-85 miles a week in training runs. Despite Minnesota's harsh winter and spring weather this year, he did not miss time in his training.

"Someone once told me the marathon doesn't care if it was snowing in March or icy in April when you were supposed to be out training," said Smith. "You have to put in the work no matter the weather."

As runners age, their times naturally begin to slow down after their peak running years. Smith realizes that is part of the aging process, but it doesn't stop him from training and striving to run his best each time out.

"I am not wired to just go out and run to get a T-shirt," Smith said. "Everyone runs for a different reason, and that is great. For me, I just want to challenge myself each time out to be the best I can be on that day. I love seeing all the runners on the course because all those runners are what really make Grandma's a great event."

On race day, Smith set out to run with the three-hour time pacers in hopes of nudging down his time from the previous year. He soon realized there was a problem he needed to deal with.

"That group of people was just too big," Smith said. "Because there were so many runners in that group, I wasn't able to run the tangents, which is the shortest way to run the course, so I had to get ahead of the group and then just run my race."

"As you age your body just naturally breaks down when you put in those long miles," said longtime (now retired) Duluth News Tribune sports writer Kevin Pates, a friend of Smith's. "The constant pounding and wear and tear on your body is just tough on the body, but Brent has been the exception to the rule and is able to continue to train and sustain at a high level."

Smith is also quick to sing the praises of his longtime trainer Gary Lepisto. Lepisto, who is well-known as a coach and trainer in local running circles, sets Smith's running schedule each week in hopes of optimizing his performance.

"Nobody knows my limits better than Gary," Smith said. "I owe my results every year to Gary - in the case of this year, Gary and the weather, which worked out perfectly."

Lepisto has worked his magic with many runners, but Smith is one of his star pupils.

"Brent's training is based off the legendary Arthur Lydiard, as all top endurance athletes are," said Lepisto of the late New Zealand coach and runner. "In order to get to Brent's level, consistency is key. He will rarely miss a run, working out six to seven days a week. That consistency combined with a couple of very easy days a week keep injuries at bay most of the time. If we do have a problem, we get it checked out right away."

That training comes into play over the course of the race, but especially in the last stretch from London Road to the finish line in Canal Park.

"I think when most runners hit London Road, they have the mindset of 'I made it to Duluth' when in all reality, you still have seven miles to go," laughed Smith. "Bad things can happen in that final seven miles, so you have to have the mental mindset to fight through it. That is a tough thing to do when you're at that point of the race."

This year there wasn't much getting in Smith's way, as the lanky former Cloquet Lumberjacks star cross country skier ripped through the final stages of the race to win yet another impressive age-group title.

But Smith isn't in it for the glory.

"Brent is about as humble as they come," said Pates, a former runner himself. "He doesn't seek the spotlight and relishes the solitude of running; and those attributes, along with his mental makeup, serve him well and the results prove it."

Hopefully, Smith will be able to avoid the injury bug again next year and provide local running fans with another spectacular run at Grandma's Marathon.