More than 400 softball players take part in the Wood City Classic parade of teams on Saturday at Braun Park.

Last weekend marked the second annual Wood City Classic girls fastpitch softball tournament at Braun Park in Cloquet. In all, 36 teams competed in three age divisions, U-10, U-12 and U-14.

"After the Ashley Abrahamson tournament ended, we didn't want to lose that weekend for our softball players," said tournament director Adam Maslowski. "The Cloquet Youth Baseball/Softball Association decided to hold our own tournament, and it is continuing to grow."

After the Covid year of 2020 when there was no tournament, the Wood City Classic started in 2021 with a total of 18 teams.

"Now, this year, we had 36 teams," Maslowski said. "We also have a Lumberjack Award for one player on each team as a way to keep the spirit of the Ashley Award alive, as well as the parade of teams, which is always a highlight for everyone."

The U14 Gold Division championship game featured South Ridge and the Cloquet team sponsored by Duluth Electrical Contracting squaring off Sunday evening under clear blue skies. Cloquet held a 3-2 lead until the bottom of the fourth inning when South Ridge struck for a pair of runs to gain a 4-3 lead. The game ended after the top of the fifth inning with South Ridge taking the title.

"The whole tournament was a lot of fun for our kids," said South Ridge coach George Brewer. "Our girls played great defense and did just enough on offense to get the win."

Maslowski, who is also the coach of the Cloquet U14 squad, said the whole tournament and the championship game were special.

"I've never had so much fun coaching," Maslowski said. "Just to get into the championship, we had an extra-inning 7-4 win over Proctor that went to the international tie breaker rule," he said, referring to the practice of putting a runner on second to start the extra inning, which allows for teams to more easily score a run than if they didn't have a runner in scoring position. "To score three runs and then hold them off was fun. We worked on keeping positive, and the girls did a great job all weekend of that."

Grand Rapids won the U14 Silver division by defeating Northwestern Gold in a tight game.

In the U12 Gold title game, Esko downed the Duluth Blue squad, while Northwestern Black took the Silver division title by slipping by the Proctor Hammers.

Hermantown White beat Superior for the U10 Gold division championship. In the Silver division, Cloquet Sappi overcame Cloquet Curves for the title.

The tournament organizers also raffled off more than $1,000 worth of bats. 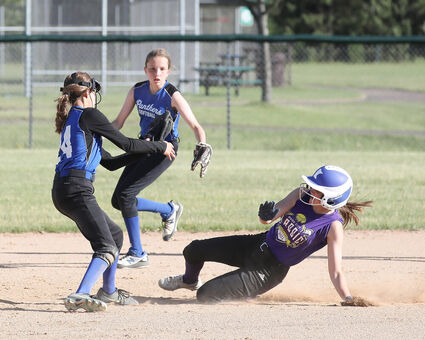 "We need to thank Carlton Meats for their donation of $500 towards bats," Maslowski said. "They also did a great job in the concession stand all weekend. We also had a great grounds crew that got the fields ready, so a special thanks to all of them and Logan Dushkin, who spearheaded that crew this weekend."

"Our umpiring crew also did a great job," Maslowski said. "They umpired 96 games. When you add the championship games where we had two umpires for each division, that is basically 106 umpired games, and that's impressive."

Perhaps the most impressive part of the weekend were the crowds that gathered. Parking was at a premium.

"We had cars line up on the roads and the parking lots were full," Maslowski said. "I think more than anything, that shows the interest in girls softball in the area, and hopefully we can keep this going in the future."