On The Mark: Week in Brazil is a thrill 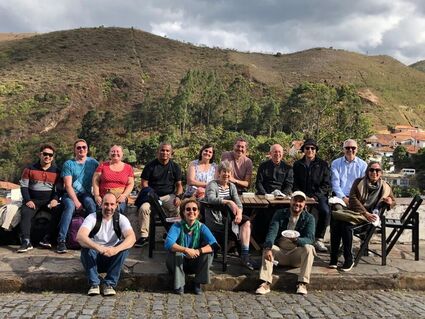 Often, we learn a lot about our own country, state, city and workplaces by sharing experiences with counterparts around the world. In late June, I flew to Belo Horizonte, Brazil, to participate in a weeklong exchange with cultural economists from Spanish- and Portuguese-speaking countries. We last met in Valdivia, Chile, two years ago.

The participants in the exchange included professors, researchers and students from many countries, including Portugal, Spain, Chile, Colombia, Mexico, Peru and Argentina.

In addition to learning from each other, working 9 a.m. to 6 p.m. for three days, we also went on a field trip to Ouro Preto, a former gold mining town in eastern Minas. We visited churches, museums, and restaurants, and spent time wandering around the city. The photo on this page is of our group in Ouro Preto.

I've been spending time intermittently in Brazil since I taught there for two months at the Federal University of Minas Gerais. Minas is a region much like northern Minnesota, only warmer. It has huge open pit iron mines, where the equipment used comes from our region. In the 18th century, the Portuguese arrived and brought slaves from Africa to work in the gold mines.

I learned a great deal from the presentations and healthy debate from the floor. Most participants shared research on galleries, artistic occupations, and/or film and music. Presenting on the final afternoon, my subject was the creation of the Pine Knot News and our art gallery, including a photo of editor Jana Peterson holding the trophy we have won two years running as Minnesota's most outstanding weekly newspaper.

My goal was to encourage others to think outside the box of industries and occupations - showing how we have combined producing a weekly paper with running an art gallery in the same space.

It's the seasonal buildup to Brazilian national elections, where the widely disliked incumbent president Bolsonaro is being challenged by a social democrat, Lula (Luiz Inácio Lula da Silva), a past populist president. Bolsonaro has recently been credibly accused of corruption, and current polls show 31 percent of voters favoring him with 45 percent supporting Lula.

I stayed with longtime friends Clelio Campolina and his wife, Alda Palhares. Campolina joined my center at Rutgers University for a year in the 1990s, bringing Alda and his three school-age children. A fellow economist, he worked his way up over the years to become president of his university and a minister of science and technology.

Alda took me to the Belo Horizonte symphony one evening. The director led a moving version of Handel's "Joshua," an oratorio composed in 1747. The five soloists, orchestra and choir were marvelous, their sounds ricocheting off the walls. Another evening, Clelio, Alda and I enjoyed a free performance of three accordion soloists playing in a city park, each supported by an electric guitarist and a drummer. Seated on chairs not far from the stage, we thrilled in the unique way each man ran his fingers over the keys and buttons to produce unique sounds. The large audience rewarded each combo with thunderous applause.

Brazil is the most populous country in Latin America. At 204 million inhabitants, stretching from European-settled regions such as Porto Alegre in the south to the Amazon in the north, its population is nearly twice that of Mexico's. It has its challenges: the Amazon, with its battles between Natives and would-be farmers; and its unequal income distribution - the richest 20 percent of Brazilians earn 55 percent of annual income, a maldistribution exceeded in Latin America only by Columbia.

I love Brazil for many reasons. Its Carnival, celebrated in all regions. Its unique musical contributions, including música popular brasileira and bossa nova. Its sunny climate, the joy of its people, and its robust democracy.