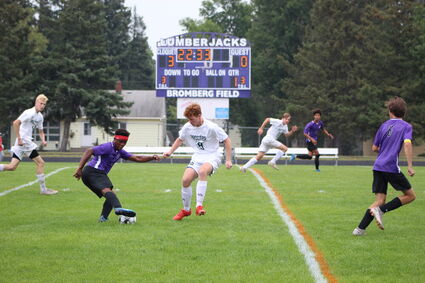 A boys soccer game took place on Bromberg Field in 2021.

The talk is preliminary at best, but there is a movement afoot to explore replacing the grass at Bromberg Field in Cloquet with artificial turf.

At the Cloquet school board meeting last month, superintendent Michael Cary provided an update on possible future plans for the facility that hosts an aging track and football field. There wasn't much to report, except that the community group that formed several months ago and the board subcommittee were going to meet, after Cary met with the group in June.

The groups want to discuss cost estimates and what a new field, which would likely need to entail a new track as well, would look like. There have been talks of doing even more - moving and expanding the tennis courts, adding team rooms by the field and replacing the scoreboard - but those ideas also bring far greater costs than the community group originally anticipated.

Ojanen said the committee wants to discern how it could offset some of the costs for a project, perhaps with fundraising similar to that by other schools in the region, such as Esko's successful efforts 10 years ago. The group and the district will need to decide what funding would come from bonding, as part of district maintenance, and what the group would fundraise for. The group was originally formed to deal with replacing turf only.

Ojanen said there are about a dozen people on the committee, and they are in the very first stages. It first needs to know the will of the district, he said.

Russ Davidson, the former math teacher in Esko who returned to help his district in forming the Turf Club in 2012, said people in Cloquet need to find ways to be creative in raising money for a field, should that be the direction they go.

The flood of 2012 further damaged a degraded facility in Esko, leading to the passage of a $2.7 million referendum for a new complex after a past referendum had failed.

Davidson said the prospect of turf likely led to the failed referendum, saying that it likely seemed like a "stretch" for voters who would see taxes increase. The referendum that passed did not have turf in the equation under the promise that Davidson and his growing group would find money and donations for the $400,000 cost of the turf.

That effort proved to be successful. There were a few big donations, but most came in $1,000 increments. The Turf Club used an incentive, passes to sporting events, to entice donations. It also received a large cash promise from an alumnus to ensure money would be in place for field replacement for turf with a lifespan of about 15 years. Revenue also comes in from advertising signs around the field.

The advantages of turf are lower upkeep costs and being able to use it more often despite the weather. Esko receives rental money from other districts and organizations for use of its field.

It's hard work, Davidson said, and any such committee will have to plan on at least weekly meetings during any rush for donations. He said it helps to have a supportive school board and superintendent. And some type of group needs to remain in place to ensure funds for the future of the field.

"It was a labor of love," Davidson said. "It blessed my life."

By the spring of 2013, the funding was in place and by the fall, Esko had the field found today west of the school.

If Cloquet decided to move forward, the earliest it could have a turf field would be 2023. Ojanen told committee members last month that he thinks it could raise $500,000 by early 2023.