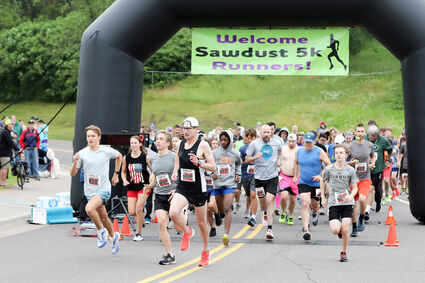 Despite a wet weather forecast, more than 150 runners took part in the annual Fourth of July Sawdust 5k at Pinehurst Park on Monday.

What could have been deemed perfectly wet and cool running conditions for Monday's Sawdust 5K turned out to be enough of a nuisance to stop a number of runners from signing up the day of the race.

"Our pre-registration numbers were right around where they normally are," said Sam Jacobson, who, alongside his wife, Julie, is a race director. "With the forecast for rain and bad weather on race day, our normal race day registration numbers were down. We didn't have the number of walkers we would normally have, and that might be because they were worried about being on the course if the weather got bad."

For those who did run, the temperature was in the upper 50s combined with some light fog, allowing runners to enjoy a comfortable run.

"The race went off smoothly because of the volunteers and all the work they did," Sam Jacobson said.

Amber Kantonen of Barnum was the overall women's winner. The 46-year-old ran an impressive time of 22:29, 13 seconds faster than 15-year-old runner Bobbi Nichols of Alexandria, who was second. Melissa Plante of Cloquet was third with a time of 23:03, 14-year-old Brooklyn Wasche was fourth; and 13-year-old Danica Wyman of Wrenshall took fifth.

"We are going to be offering a virtual race for runners to be able to participate who may not have been able to make the race," Julie Jacobson said. "If people want to know more they can check in on our Facebook page and we'll have some details on what they have to do to register."

A number of runners also participated in the Jimmer Challenge, which is named after Jimmer Hagerl. Runners who finish the 5K have the option of turning around and running back to the start to complete another 5K.

Due to the weather conditions, the 1-Miler run in honor of Lavonna Prevost, which is held just prior to the parade, was canceled when the parade was called off. 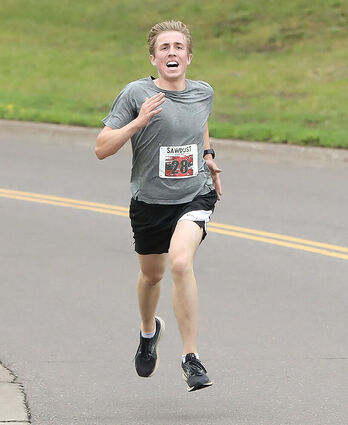 Despite the weather, the spectators still turned out and cheered on runners and walkers in a show of support.

Perhaps the most interesting runner in the race was "joggler" Bob Evans. The 39-year-old from Iron River, Wisconsin was part of a family circus act that came to Cloquet to entertain and teach children how to juggle during the July Fourth afternoon event at Veterans Park. Evans finished 10th while running and juggling the entire 5K.