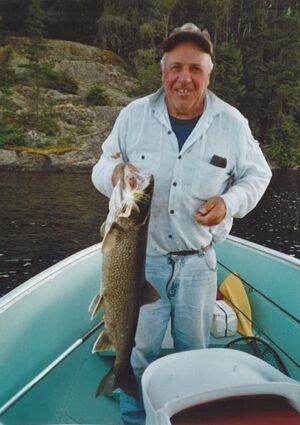 Douglas William Padgett, 87, of Virginia and formerly of Cloquet, died from complications of Covid on July 9, 2022, at Edgewood senior living in Virginia. He was born May 6, 1935, in Virginia, the son of Roy and Sarah (Hovin) Padgett, and was a graduate of Embarrass High School, where he was a member of the “Flying Finns” track team. Doug earned his Bachelor of Science in education from the University of Minnesota Duluth. He lived in Tower-Soudan, was a longtime resident of Cloquet, and retired in 1990 to his home on Lake Vermilion in Tower. Doug was an educator, teaching in Tower, Babbitt and Cloquet, where he served as the boys varsity head swim coach. He was also a swimming official and was an agent for Franklin Life Insurance Company. Doug was a lifetime member of the Minnesota State High School League, and an award-winning swim coach. He enjoyed fishing, hunting, gardening, and anything sports-related. He supported athletics at every level.

Doug is survived by his children Liz Stevens of Lake Vermilion and Virginia, Paul (Karen)

He was preceded in death by his former wife, Edna Padgett; siblings Jean Haskin, Robert

Padgett and Floyd Padgett; sons-in-law Mike Kortie and Robert Stevens; and his best

friend, mentor, father figure and former coach, Ed Hendrickson, with whom he will be laid to rest.

Gathering of family and friends: 10 a.m. until the 11 a.m. memorial service Thursday, July 14 at the Bauman-Cron Funeral Home in Virginia. Private inurnment will take place in the Waasa Cemetery in Embarrass.

The Padgett family wishes to thank the staff of Edgewood in Virginia and CaringEdge Hospice for their compassionate care and concern. Memorials are preferred. Family services provided by Bauman-Cron, a Bauman Family Funeral Home in Virginia. To share condolences online, please see http://www.baumanfuneralhome.com