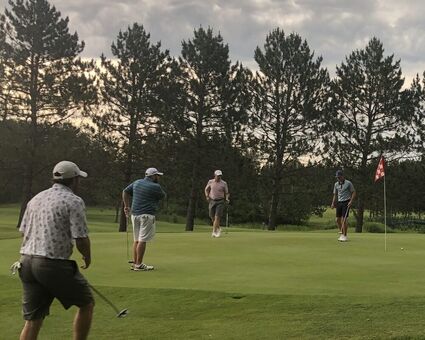 The championship flight of golfers (from left, Alex Kolquist, Jimmy Stafford, Dan Moline and Sam Baker) in the Cloquet Invitational amateur tournament plot their putts at the No. 6 hole Sunday afternoon, as a thunderstorm threatens. Play was stopped for lightning after that hole, and resumed about an hour later at the 99-year-old Cloquet Country Club.

After all, the 2021 Cloquet High graduate was the medalist and individual and team champion at the 2021 Minnesota State High School Class AA golf tournament. He also holds - from the regular white tees - the Cloquet Country Club course scoring record of 62. With a college scholarship, Baker will be leaving in August to attend Florida Gulf Coast University to participate in their men's golf program.

"Growing up as a kid golfer in Cloquet, I always dreamed of competing and some day playing in the Cloquet Invitational," Baker said. "It's a big event. I watched the finals for many years. It's very gratifying that my name will now be on the champions plaque in the clubhouse, forever."

Of course, the eventual champion was only one of 168 players to play in the three-day 91st annual invitational, held at the 99-year-old Cloquet Country Club. Shane Johnson won the senior championship flight on a course that was in impeccable condition. But the spotlight was on the youngster from the start.

During his first round on Friday, the Cloquet grad came out early firing on all cylinders.

"My goal is to win each day in a multi-day event," he said.

That approach certainly worked for Baker. In his opening nine holes, even with a double bogey on No. 4, he shot an incredible 32, four under par. On a challenging, mature golf course, mostly the original nine holes, he had six birdies and nearly one more. Baker followed it up with a 34 on the back nine for 66 total - five under par. After Day 1, he was seven strokes ahead of Jim Stafford at 73.

On Day 2, Baker again had the all-player low score, shooting an even-par 71. He had a nine-shot lead going into Sunday, which ended up as a rain/weather-shortened nine holes.

The final foursome grouping on Sunday, besides Baker, included three former Invitational champions. Jimmy Stafford, Mr Steady, has been a Country Club member since he was a young kid, winning many area youth tournaments on his way to building up to his Invitational win. Alex Kolquist, from Hermantown, has won the invitational twice and is always a strong contender. Dan Moline is considered by many as the finest pure ball striker in all of the Duluth area. It was a great pairing. 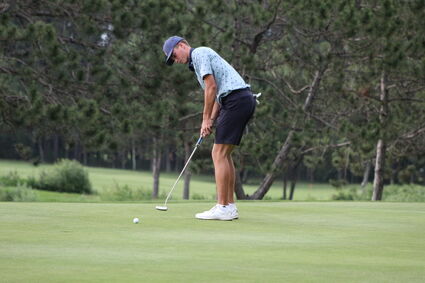 Last week was a busy one for Baker, who played in the Minnesota State Open at Bunker Hills golf course in Coon Rapids July 5-7. The Cloquet Invite was July 8-10. The state open includes some of Minnesota's finest amateur, and a few professional, golfers.

"I usually don't schedule two tourneys in one week, but I had marked the Invitational early in the year on my calendar and for sure wanted to play at CCC," Baker said. He missed the cut at the Open, but that gave him time to come home and play a practice round at Cloquet.

The new CCC champion said his upcoming golf schedule includes competing in the Minnesota Golf Association Amateur Championship July 18-20 at Olympic Hills Golf Club in Eden Prairie and then either the Cloquet Club Championship or the Arrowhead Invitational at Ridgeview in Duluth.