A different kind of rock show 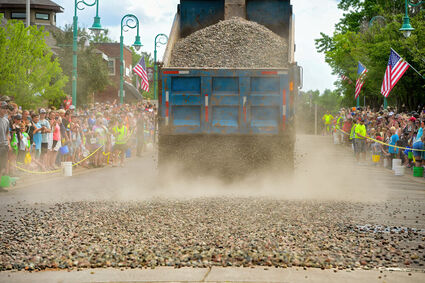 Crowds line both sides of Elm Street in Moose Lake Saturday, waiting for the moment the Clark-Olsen Agate Stampede would begin. It was the first stampede since 2019 and people of all ages lined up for a chance to find agates and money in the tons of rock dumped onto the road.

As temperatures heated up in Moose Lake this weekend, so did the number of people there for the Agate Days celebration, especially on Saturday afternoon. A half-hour before the 3 p.m. agate stampede, the streets were already lined with eager spectators, eventually standing four- and five deep in the heart of the southern Carlton County city.

What is an agate stampede, you ask? It starts with two dump trucks driving up Elm Avenue in Moose Lake, dropping all kinds of rocks and gravel, plus 400 pounds of agates, and $250 in change. Once the dump trucks have passed, the crowds hustle into the s...