Breweriana: It's more than beer cans 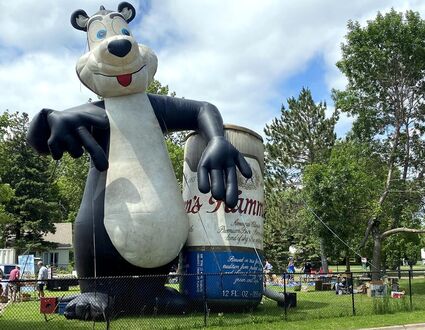 The 40-foot-tall Hamm's Bear made its annual appearance at the Northeastern Saloon during the Nordlager breweriana show. Northeastern Saloon & Grille proprietor Bert Whittington owns the huge, inflatable piece of beer advertising. To the best of Whittington's knowledge, only six of the inflatable bears were made in 1980 for promotional use at events by beer distributors.

There's only one place a person can see a 40-foot tall bear promoting a famous brand of beer, and it's in Cloquet.

The Hamm's Bear is an iconic advertising creation, and Northeastern Saloon proprietor Bert Whittington owns the largest version of the well-known bear. With the help from a few friends, Whittington inflates his giant bear on the Northeastern's lawn on Dunlap Island once each year during the Nordlager breweriana show.

Breweriana shows are like a traveling museum of beer advertising and history related to brewing.

It's an unfamiliar term to many, but "breweriana" is the word coll...