A Cloquet Area Fire District ambulance waits in the background while worried parents wait to pick up their children after a bomb scare in Esko in March. Ambulance calls and costs are on the rise, which often leaves taxpayers making up the difference as reimbursements continue to fall far short of paying the bills, especially in rural areas where the population is more spread out.

On March 17, witnesses estimated nearly two dozen squad cars, ambulances and firetrucks from multiple jurisdictions responded to the school campus in the heart of Esko. Someone - in Africa, it later turned out - had called in a bomb threat. There was no bomb, but that didn't change the fact that emergency responders and law enforcement waited for hours before the scene was cleared.

At least two ambulances and staff responded from the Cloquet Area Fire District (CAFD). Nobody was billed for those services; it's just part of why communities have emergency services: to be prepared for whatever may happen. Or not.

But the bomb threat helps illustrate an issue that is being debated locally and across the country: how to pay for emergency medical services. Not just for the ambulance that arrives on the doorstep when you call 911, but for the costs of maintaining that service: the staff, equipment, training and even the times they aren't busy responding to calls.

Ambulance costs became a hot button issue locally last fall, when the CAFD board - which has taxing authority granted by the state - voted to raise the tax rates paid for ambulance services dramatically.

Residents in Thomson Township, in particular, balked when they opened their proposed tax bills and found the ambulance portion was nearly four times the previous rate.

Township officials threatened to start their own ambulance service or get services elsewhere: both actions that would require approval of a state board.

Eventually, after several meetings packed with irate township residents, the CAFD board voted to roll back its increase and promised to carefully study costs and revenues on both the fire and ambulance sides of the equation.

Since then the board hired a consultant to do exactly that. The board adopted the resulting 12-page report and recommended methodologies for determining costs at its meeting July 20.

CAFD is a somewhat unique organization in the state of Minnesota. It provides fire protection to 170 square miles and ambulance service to a state-mandated area of more than 250 square miles in Carlton County and southern St. Louis County.

Unlike many rural ambulance services, CAFD provides advanced life support, which requires substantially more training and equipment for its staff.

The consultant recommended a 50/50 split of costs for instances where it wasn't clear if it was a fire or ambulance expense, and also in the case of staff time not spent on call. The other option for staff time not spent on calls would have been to apply the percentage of time on task, which he said would have shifted the burden significantly toward increasing ambulance costs, and recommended against it.

CAFD chief Jesse Buhs said he likes the methodology and said he was good with the 50/50 split for time spent waiting for calls.

"Yes, the odds that the next call will be an ambulance call are greater, but we aren't staffing for what we think it will be, we're staffing for overall call volume," he said. "We tried to find a middle ground that was reasonable for folks that pay for ambulance and those that pay for fire."

At the moment, it seems both sides are happy with the report: CAFD because it now has an evidence-based system to determine costs and, ultimately, the tax levy; and Thomson Township officials, because the report estimated the ambulance costs should rise at a much lower rate than the CAFD board proposed last fall.

But it's an uneasy truce. Thomson Township supervisor Jason Paulson, a member of the CAFD board, told the Pine Knot News that the vote was well-received in Thomson, but noted that the board voted to help pay for a study for Carlton ambulance, which provides services to a smaller portion of Thomson Township.

Thomson Township attorney Dave Pritchett is also convinced that CAFD should not be able to tax the townships that lie outside the fire district boundaries, that it's "taxation without representation."

Buhs didn't want to weigh in on what he considered a legal or legislative question, but said CAFD is not interested in shrinking its ambulance primary service area boundaries. They are trying to work and communicate better with Thomson Township and other areas they serve, he said.

"I think we're trending in a good way," Paulson said.

While the tension simmers between Thomson Township and CAFD, ambulance services across the state and country are facing greater challenges.

Buhs said nationally that ambulance calls are on the rise, which means they need more staff, but revenues - the reimbursements paid by insurance companies and especially Medicare - are not keeping up with costs, leaving taxpayers making up the difference for calls, as well as paying for the costs of keeping a well-qualified ambulance service ready.

"It's a vicious cycle," Buhs said. "And unfortunately, ambulance service is not considered an essential service, so it's not funded by state or federal dollars."

State legislators proffered several bills in the most recent session aimed at supplementing ambulance costs, but none of them were adopted, said Dylan Ferguson, executive director of the state's Emergency Medical Services Regulatory Board, which issues certification to EMT and paramedic professionals and issues licenses to EMS agencies to operate.

The EMSRB also determines the primary service areas across the state of Minnesota.

"The PSA system ensures every single area of Minnesota will receive an ambulance when someone calls 911," Ferguson said. 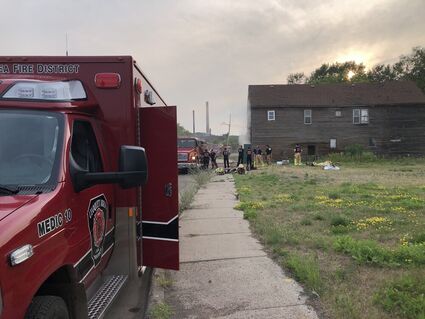 Training for fire and emergency medical calls is a big part of being prepared. Here CAFD staff - who are cross-trained as firefighters and paramedics or EMTs - train at a practice fire last summer in Cloquet.

Buhs worries what will happen if these issues aren't addressed. The federal government is studying reimbursement rates, but not fast enough, he said. And it may lead to rising costs here - and many other places.

"We're in a situation right now where we have inflation, rising fuel costs, rising costs for equipment, training and more," the CAFD chief said. "Everything is rising so rapidly, the only thing that can occur is either service decline or taxpayers have to subsidize the cost of service."

The state director, Ferguson, agreed that EMS services across the state are stressed, for all of the reasons outlined by Buhs. But EMS leaders are working hard to continue to provide the same high-quality service, he said.

"It's important that elected officials at all levels work together to sustain the EMS system for years to come," Ferguson said. "Only by working collaboratively - local and local, local and state - can we address the challenges moving forward.

"It's important that local communities work with one another to ensure everyone gets an ambulance when they call 911."