Baker on a win streak at CCC 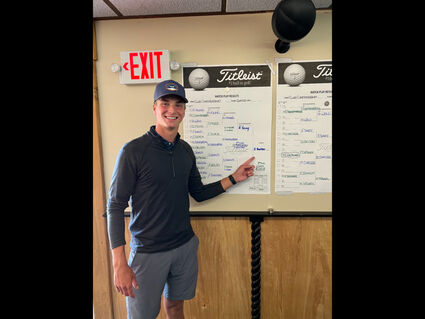 "That was a little unusual," Baker said.

Sixteen Cloquet members played in the championship flight. The format was match play, so a player had to win four matches to win the title. To get the win, Sam Baker also defeated his former high school teammate Jacob Walsh and lefty Chad Demenge. In four rounds of play, Baker had only three bogies. He played under par in each match.

Rarely in the Cloquet Country Club's 99-year history has the same golfer won the Cloquet Invitational and the Men's Club Championship in the same calendar year. Baker now joins Charlie Jensen, who accomplished the feat in 1970, Pat Fairchild in 1979, and Paul Munson in 1994.

In another golf rarity, in the Baker/Young match both players were on the par 5 No. 6 hole green in two shots, so both were putting for eagles.

Baker made an 18-foot putt and Young followed up with a 6-footer. In match play format, they had a "push" (tie) with eagles.

Arica Sheff won the Ladies' Club Championship with Tricia Manahan runner-up and Jeri Sylvester in third. Sheff continues to close in on the record held by her dad, John Sheff, for most Cloquet club championships.