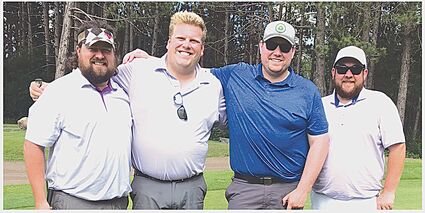 Pastika was an avid golfer and a 50-year member of the Cloquet Country Club. He beat colon cancer once, but the sometimes irrepressible disease came back with a vengeance and he died in December 2018. In response, a few of Gary's family and friends initiated the idea of the fundraiser, including Cloquet Hospital Foundation Executive Director Laurie Korby, Moose's brother and sister, John Pastika and Judy Pastika Zieg, and Moose's best friend and golfing partner, Steve Korby, and his spouse Jan Salo Korby.

Many generous sponsors and players contribute to this successful four-golfer team scramble. A majority of the funds generated go toward helping cancer patients with their comfort while getting care at the Cloquet Community Memorial Hospital's chemo/infusion center.

The winning team - Adam Stowell, Matt Carlson, Jimmy Stafford and Andrew Salo Korby - with a score of 57 (14 under par) was congratulated and recognized as a repeat champion from last year.

It was no easy task. Their 57 was matched by a group of experienced golfers in Rick Stowell, Steve Gault, Dick Conley and Neil Busch. To break the tie, a scorecard playoff went to the course's No. 1 handicapped challenge, Hole 2. Here, "Mr. Steady," i.e., Jim Stafford, had just made a 35-foot birdie putt, which dramatically determined the championship.

Second-year event player Greg Schulzetenberg of Lake Country Power, a tourney sponsor, had good things to say about the event.

"Involvement in events like the Moose cancer fundraiser supplement our mission at Lake Country Power," he said. "We want to see our communities prosper, support our members, and are proud to be part of initiatives like this."

The tournament raised more than $7,000 for CMH cancer patients.