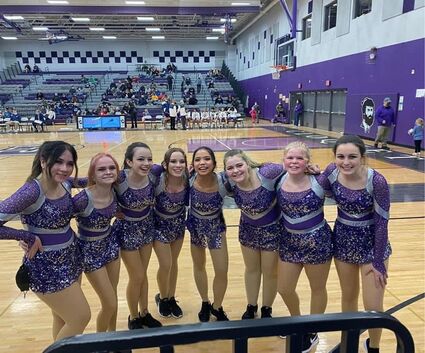 CHS Pep Squad members are cheering and dancing at games.

With new cheers, routines, and coaches, the Cloquet High School pep squad is ready to change the face and atmosphere of Cloquet spirit this coming season.

"We only had eight members, so most of us were scared of the (reactions) of other students," said Robie Anne Forte, a pep squad member. "We knew that it had been a decade since CHS had a pep squad, but it turned out really good every time we had a performance."

Because the high school hadn't had a pep squad in recent memory and had stopped offering majorettes, dance line and cheerleading several years ago, Cloquet's Community Education and Recreation program took over dance line.

Since then, dance line has been a staple at CHS sporting events. As a fall program, the group mainly performed at home football games, and occasionally extended their season to encompass home basketball games. They entertained the crowd with their halftime performances and sideline routines.

After the traditional 2021-22 fall season, however, the dance line leaders decided to take the program to the next level in response to the team's interest in expansion.

Deb Carter, mother of 2022 senior Katelyn Carter, stepped up to coach through the winter.

With a team of eight, coach Carter worked to change the group to the CHS Pep Squad that stands today. Alongside dance routines, the pep squad added cheerleading to its repertoire. With both forms of art included in the shows, coach Carter and the girls felt it fitting to change the name to "pep squad" to fit the expanding genres. After the regular season of varsity football half-time and sideline performances, the group progressed to winter performances in order to cheer on the basketball sidelines.

"Most of the girls wanted to bring back cheer," said Carter. "They wanted to be more active during games."

With YouTube tutorials and small adaptations, they worked to add cheer into the routines. And, with an encouraging response, kept it going.

"After every game, we would receive so many positive comments from the players, the crowd and teachers and staff," Carter said. "People loved to see cheerleaders again. And our girls really loved adding cheer to our performances."

In an interview, Katelyn Carter mentioned the environment the group created for her.

"The pep squad is special to me because the girls on the team start out as your teammates and become your friends," Carter said. "[It] has always given me something to look forward to, like practice after a hard school day, or the excitement of a game day."

"My favorite part about the program ... is us girls being family and being there for one another," said Forte.

This year, the pep squad will take to the stands once again. Coached by both Katelyn and Deb Carter, the duo is excited to start the year off strong.

For Katelyn, the motivation to coach stems from her love of the sport and team.

"I'm most excited to teach new cheers and new dances to perform," she said. "I want to teach the participants and watch them grow."

Katelyn will use her 13 years of competitive dance experience to choreograph and coach, while Deb will handle the administration and organization.

Along with new cheers, the Pep Squad will be fundraising to purchase new uniforms and poms. Last season, Deb worked hard to bring the old uniforms back to life.

"Our current costumes are from many years ago," said Deb. "I spent several hours cleaning and mending them for use last season."

The fundraisers include a Kettle River Pizza sale at the end of August and a potential car wash and pancake breakfast. Contact Deb Carter at [email protected] if you would like to donate funds or purchase from the fundraisers.

Summer practices begin Monday, Aug.15 in the CHS Small Gym 7:30-9:30 a.m., Monday through Thursday. Students 9-12 are encouraged to join, and prior dance experience is highly recommended. More information regarding CHS Pep Squad is available on the Cloquet Community Ed website.