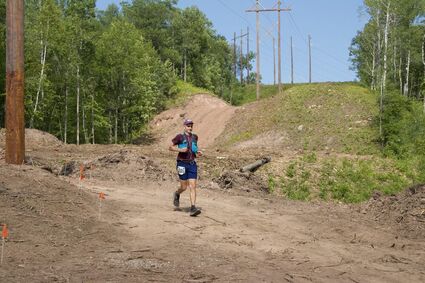 Edina's Matt Zabel finishes up the hilly power lines portion of the Voyageur Ultramarathon Saturday, before heading into the forests of Jay Cooke State Park on his way back to Carlton.

Running 50 miles on trails in one day is a feat few people accomplish. Add temperatures rising into the mid-80s, sunshine and July humidity, and it's the typical conditions for the Minnesota Voyageur 50-Mile Trail Ultramarathon.

The 40th annual Voyageur Ultramarathon attracted 249 runners to the starting line in Carlton Saturday, July 30. The challenging course and warm weather affected participants once again, with 175 of the starters making it to the finish line within the cutoff time. The 70-percent finisher rate was low compared to previous years when the rate typically has been in the high-80s percentile.

"I think the combination of the weather and the tougher course contributed to the smaller percentage of finishers than usual," said Samantha Frey, Voyageur race director. "We didn't have any large medical issues or emergencies on the course. I'm sad about the low finisher rate because I want to see everyone who starts cross the finish line. I want to hug everyone who crosses that line."

Frey was present at the finish line for seven hours, greeting and congratulating each finisher as they crossed the line. There were 39 females and 136 males who completed the race.

Michael Quesnell of Madison, Wisconsin, was the overall race winner in a time of 7:06:43. The 29-year-old finished 46 minutes ahead of runner-up Benjamin Cogger, of Duluth, who completed the course in 7:53:14. Jake Hegge, of Onalaska, Wisconsin, was third in 7:54:57. Both Cogger and Hegge are previous winners of the Voyageur and this was Hegge's 10th Voyageur completion.

Sara Conrad, of Minneapolis, captured the women's title, crossing the finish line with a time of 9:22:56. Conrad finished 18th overall among the field of 249 starters. Shanda Demorest, of La Crescent, Minnesota, was second in 9:53:59, and Emilia Cameron, of Madison, Wisconsin, was third in 10:02:32.

The 42-year-old Conrad finished second in last year's Voyageur Ultramarathon and has finished the race four times, plus she won the Eugene Curnow Trail Marathon two weeks ago. The Curnow Trail Marathon is a Voyageur Ultramarathon partner race and uses the same course, although Curnow race participants run about 26.2 miles one-way starting near the Duluth Zoo, finishing in Carlton.

Conrad was locked in a close race with the other top finishers through the midpoint turnaround when her sister, who was serving as her support crew, told her to "put the gas pedal on." Her lead was less than four minutes at that point and she was struggling with upset stomach problems, but Conrad kept her race strategy in place to slowly pull away for a 31-minute victory. She said her sister told her the finish was exciting with loud cheering from a big crowd, but Conrad admitted it was all a blur and she doesn't remember any of it.

Persisting through a decade of changes due to the pandemic and trail-routing disruptions since the 2012 flood, the race committee was able to design and stabilize a more permanent course for this year's Voyageur event. The redesigned course featured approximately 75 percent of the historical route, with adjustments to incorporate new trails and eliminate about 3 miles of pavement. Race organizers said the official distance was 51.6 miles on Saturday. 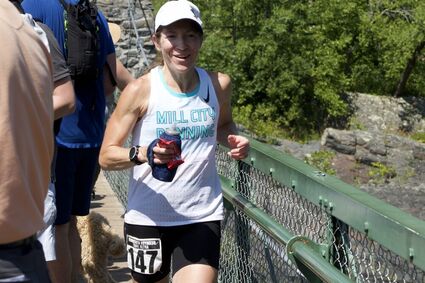 Sara Conrad captured the women's title, crossing the finish line with a time of 9:22:56. Conrad finished 18th overall among the field of 249 starters.

Founded in 1982, the Minnesota Voyageur 50-Mile Trail Ultramarathon is one of the oldest trail ultras in the nation. The race follows a rugged, out-and-back course that takes runners on a trek from Carlton through Jay Cooke State Park and heads northeast over difficult and sometimes rough trails to Duluth and back. Runners pass by scenic overlooks, traverse remote trails deep in the woods, and cross the iconic swinging bridge over the St. Louis River.

The start and finish line are at the same location near Carlton High School. The Minnesota Voyageur is managed by the Northern Minnesota Track Club and is led by an 11-member committee of volunteers. About 100 volunteers assisted with this year's race.

Find more information and full results are at http://www.voyageur50.com.