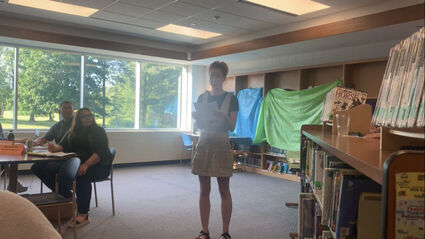 Another tumultuous week within the Wrenshall School District saw a school board member formally apologizing to one group of people, while offending another, and teachers and administrators confronting the board about the impact of its behavior.

"As a member of the LGBTQ+ community and co-advisor of our (gender-sexualities alliance) club, I can no longer remain quiet as our leadership ignores human and students' rights," said the school's media specialist Chloe Swanson during the board meeting Monday, Aug. 8.

Her 3-minute appeal was met with a round of applause from a room filled with mostly teachers.

Swanson was reacting to comments made by Jack Eudy during a committee of the whole meeting Aug. 3. She also explained she was told last school year by a supervisor to suppress a children's book about non-traditional families, "And Tango Makes Three," until complaints from one family blew over.

"Instead of creating a robust and exciting library media program, I was holding hands of LGBTQ+ students as they cried, contemplating suicide, because of actions of leadership and bullying of their peers," Swanson added. "I could only say, 'I'm sorry, this is so unfair.'"

Swanson's appeal came after school board member Jack Eudy ended the Aug. 3 committee of the whole meeting by saying young students don't need to be taught about homosexuality.

"They need to be kids," Eudy said. "They don't need to know about all this transgender, all this other stuff. Gay, whatever. It's not homophobic. It's common sense. They've got a right to be kids."

Then Monday, Aug. 8, Eudy apologized to the Fond du Lac Band of Lake Superior Chippewa for remarks he made about

using dogs to dispose of Native American burial remains in the event any were found during the school's parking lot project.

"I ask for forgiveness for my ignorance and failure to educate myself on your ways and beliefs," Eudy said, reading from a copy of a letter he'd sent to the Band. "I'm ashamed I brought this on the people in our school district."

Eudy's vacillation between insult and apology came as superintendent Kim Belcastro and others tried to emphasize positive developments, including nearly completed facility improvements.

Belcastro said she was intent on "resetting" and "refocusing" on the crest of a new school year.

Belcastro noted Aug. 3 that enrollment projected to 342 students in 2022-23, with the district having recently lost at least two families fed up with board politics.

el dealing with issues," Belcastro said. "That's what I have been told."

Eudy bristled at the notion, saying he was tired of himself and the board being blamed, and that he's met with families who are concerned about certain books being taught.

"The board does have a say on curriculum and what's being read," Eudy said. "If we don't take a stand we're losing. ... It's not just the board that needs to do better. It's the whole community. It's the teachers, the superintendent, the principal. It's all of us."

Another teacher, Joel Swanson, said he was entering his 29th year at the school, and believed parents and teachers' collective love for students was leading to misplaced fear and targeting.

"If you have any fears about what's happening in our school and classrooms, please talk directly to your child's teachers," Joel Swanson said. "Trust we will do our best to find common ground for the benefit of all."

Chloe Swanson said her mother and teaching peers talked her out of leaving the district, reminding her of the values that exist within the school community.

"They deserve fierce advocates and strong role models," Chloe Swanson said of students, before concluding by noting it wasn't her role to educate adults.

"It's my job to prepare students with critical thinking, problem solving and empathy building skills," she said. "It's not my job to teach adults the following: that LGBTQ+ people exist."

On Monday, the Wrenshall School Board unanimously adopted a ban on cellular phone use during the school day.

Dubbed "Away for the Day," students will have to turn off their phones and leave phones in their lockers prior to the day's first bell.

Students won't be allowed to turn phones back on until the school day is completed. Progressive discipline includes a three-strikes policy that ends with a student not being able to bring their phone to school for a quarter.

"It's problems galore," principal Michelle Blanchard said of cell phones. "I haven't seen one positive thing with phones, so that's why we're going with this policy."

Blanchard described the phones as a distraction, with students creating TikTok videos, texting excessively, taking others' photos without permission, and even bullying. She found one Instagram account that featured pictures of Wrenshall students sleeping in class.

"There's less engagement in class, because they're on their phones," Blanchard said.

Her appeal was well-received by board members.

Belcastro noted that all students now have Chromebooks, so they'll have access to the internet for class work throughout the school day.

The Pine Knot asked Blanchard about emergencies. It's been widely reported students are the ones often calling 911 during tragedies such as school violence.

"Let's hope and pray that it doesn't happen, but every classroom has a phone in it," the principal said. "And schools have safety protocols they follow. We would just do our best following the safety plan we have in place."

Teachers will also continue to have their cell phones on them, the principal added.