Korby's Connections: A fishing tale from far away 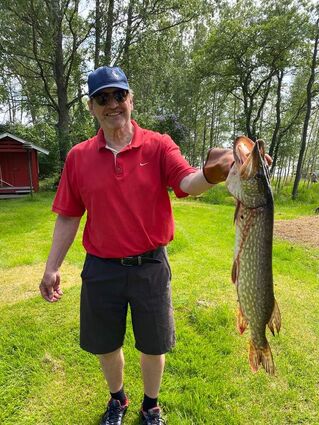 Finland's Timo Paukkio displays the 7.5-pound Northern pike he caught while fishing with his American guests in the Baltic Sea.

While visiting Finland to see my spouse's cousin, Outi, and her husband, Timo Paukkio, we traveled to the Paukkio summer cottage/cabin in southwestern Finland. The Paukkios hand-built the five buildings on the edge of the beautiful Baltic Sea. With traditional red siding and white window frames, most looked like they originated from the covers of traditional Scandinavian coffee table books. Both now retired, Timo was an engineer and Outi a school teacher, often teaching English to Finnish students.

Our families together broke bread and ate salmon and new potato soup, Karelian pirrakka (egg and stuffed pastries), and enjoyed a favorite beverage. We toured the grounds and other buildings including the workshop/lover's retreat, outhouse and, of course, the sacred sauna. The Paukkios had several gardens, large wood piles and even a children's playhouse. The lilacs were all blooming, looking beautiful and smelling aromatic.

The early June weather was much like Minnesota. Short sleeve shirts and shorts were comfortable, with temps in the 60s. The plan was for Timo to take Tony, my brother-in-law, and me to some nearby fishing hot spots along the shoreline in his Finnish manufactured boat. Timo had bought daily fishing licenses for us and we used his tackle and poles. The plan was to fish for "an hour or so."

We loaded up the boat and began the journey.

The first plotted course was to troll along a weed bed where there were impressive geese and swans, far different varieties from what I had ever seen. We were about 30 miles up the coastline north of Turku, the country's oldest city and Finnish capital prior to Helsinki. Sweden was directly west.

Timo had three different poles with us in the boat: an open reel, a bait-casting pole and a closed reel I'd compare to our American Zebco. Timo said the "kids" closed reel hadn't been used in about 10 years and yet that's what he chose. We all used trolling artificial bait, fishing about 50 yards from the often rocky shore. Timo's first cast didn't work at all. He spent a while untangling the line behind the reel cover. No bites.

We moved to the shoreline closer to his cottage and tried casting towards reeds in about 10 feet of water. Timo was using his favorite lure: the Finnish made "Professor." After a few quiet moments, Timo, who spoke a little bit broken English, clearly and excitedly said "fish on." The fish hit the Professor hard. "Probably a Pike and 2 kilograms," he said. His pole was bent nearly in half. I grabbed the landing net. The fish made several dives and I'd see glimpses and shadows of it but couldn't really tell size or species. Timo got it close to the boat and the fish made another run to Davy Jones Locker. "Maybe 4 kilograms," he said.

Now, I don't profess to be an expert netter and only hoped I didn't screw up. The line had to be stressed, I was guessing, no drag was adjusted on the reel. The fish nearly surfaced again and I thought it was my best shot ... I took a big swoop and caught it in the net. It was a Northern Pike with a gigantic head and sharp teeth. Looked like a pike similar to those found in Minnesota.

There was a lot of commotion in our boat getting the Professor out of the pike's mouth, untangling it from the net, and putting the fish on Tony's makeshift stringer. I thought maybe we'd release the fish, but Timo wanted to show it off to those on shore, clean it, and eventually eat it. It was over 30 inches long and nearly 8 pounds. We took pictures and laughed and cried about how lucky we were to be on the Finnish fishing adventure. 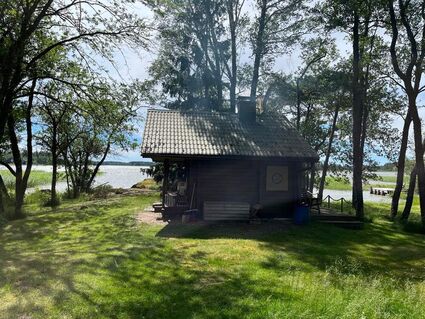 I'd be remiss if I didn't further detail our own "clean up" after the fishing excitement. We had lit a fire in the sauna stove prior to heading out on the sea adventure. I was amazed at how intricately the firewood was stacked and stored to remain dry. With no running water in the sauna, we had to haul freshwater down from the main lodge to act as steam (löyly, which roughly translates to "spirit of life"). The thermometer in the sauna didn't work but Timo manually turned the dial to 200 degrees and said "feels about here." Our group retold the Finnish fishing story in the hot sauna, third row bench seats, many times, laughing as we recalled details prior to running out the door and jumping off the dock into the chilly Baltic Sea. With all the fresh air and skin squeaky clean, I sure slept well that evening. Many thanks to Timo and Outi Paukkio, our tremendous Finnish relatives and friends for life.