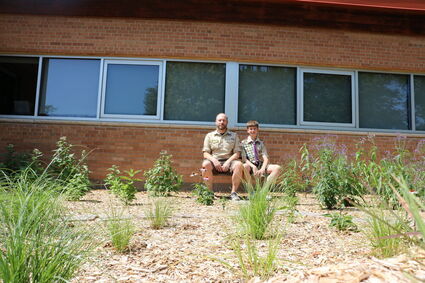 Scoutmaster Jason Mangan and his son, Matthew, of Troop 171 in Cloquet, appear in a rain and pollinator garden outside Washington Elementary School in Cloquet. Matthew's project helped him pass his board of review to become an Eagle Scout on July 28 – 30 years to the day after his father became an Eagle Scout.

Years later, Mangan, 13, attended a seminar about building pollinator habitats at the public library conducted by the Carlton Soil and Water Conservation District.

So when it came time to create a final project that would catapult Mangan into an Eagle Scout, the choice was simple.

"That gave me the inspiration for this," Mangan said, surrounded by roughly 1,000 square feet of freshly mulched rain and pollinator garden.

Mangan joined two other members of Scout Troop 171 in Cloquet in recently achieving Eagle Scout status. Chase Lauder, 18, of Carlton, and Nathan Robinson, 18, of Cloquet, are the others.

"It's a great honor," Lauder said. "It's something I can say I've done that not many other people have."

Eagle Scout is the pinnacle rank in scouting, achieved after rising through six other ranks during a person's childhood. It takes years worth of camping, merit badge achievement, and cooperation with others to reach the rank.

"It was a lot of hard work," Robinson said. "It's hard to describe without being there yourself, but it's leadership training, learning better social skills, and how to be a better person for your community. That's what I got out of it."

The newest Eagle scouts located their projects within a block of each other along Doddridge Avenue.

Robinson built a fire pit outside Our Savior's Lutheran Church, a popular meeting place for the troop.

"Plus, it's also where I go to church, so it's nice to have its own campfire place and meeting place for us to use," said Robinson, whose family provided the wherewithal for his project.

Lauder started scouting as early as he could, in first grade. Aided by the Carpenters Local Union in Hermantown, he built a pair of Little Free Libraries – one posted outside Our Savior's, and another outside St. Francis Catholic Church in Carlton.

During his meeting with the Pine Knot, Lauder noted that none of the books he'd originally placed in the Our Savior's location in May was still there, meaning people have been using the library and replacing books with updated selections.

"I believe education is a special thing," Lauder said, "and not everybody has access to books."

"It gives a lot of new habitat for bees and butterflies," Mangan said.

He described working across three days with other scouts and scout leaders to dig up sod next to the school, replace it with mulch and compost, and plant dozens of native, pollinator-friendly plants. Rainwater from downspouts on the school figures to provide the garden with all of the watering it will need, Mangan said.

"For the most part it will be self-sufficient," Mangan said. "It'll also reduce stormwater runoff."

The pollinator garden is built into the east lawn near the school's main entrance, and underneath a mature crabtree memorializing a late student, Cameron Swanson.

There's a path through the garden made from flat rocks and a stone bench which proved hot to the touch when Mangan's dad, Scoutmaster Jason Mangan, joined for a photo. 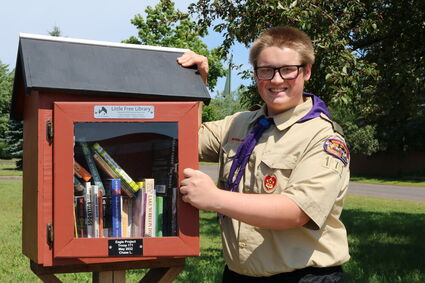 New Eagle Scout Chase Lauder, of Carlton, displays the Little Free Library he built and populated with books outside Our Savior's Lutheran Church on Doddridge Avenue in Cloquet.

It's the cycle of life that makes the pollinator garden so important to Matthew.

He's excited that a new generation of schoolchildren will be able to walk outside and use the garden as an outdoor classroom to learn about pollinators as he once did.

And he's proud his project is actively fighting for some of nature's most important creatures: the bees, butterflies and hummingbirds that help propagate future plantlife.

"I believe the Monarch butterfly just appeared on the endangered species list," Mangan said. "We're at a critical point if we're going to save the butterfly from extinction."

All of the new scouts plan to continue to help the troop moving forward.

"You can become a troop leader," said Lauder, who planned to do just that. "Plus, I still want to go on camping trips."