With Twins on the podium, it was time 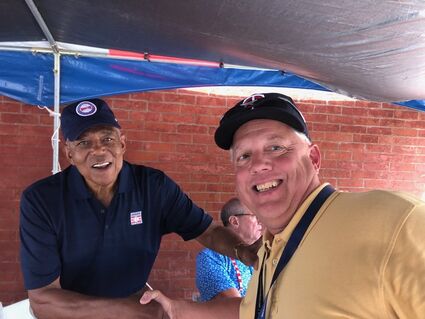 Cloquet resident Ron Tondryk has been a Minnesota Twins fan as far back as he can remember. He has framed autographed pictures of 1960s Twins stars Harmon Killebrew, Rod Carew and Tony Oliva in his living room. Tondryk played baseball at Esko and was the Cloquet girls high school fastpitch softball coach for many years. He loves the Twins and the game.

Last December, when MLB's Golden Days Era committee announced that former Twins right fielder Tony Oliva had been selected to the Baseball Hall of Fame, Ron knew he had to go and attend the ceremony in Cooperstown, New York. The induction date was set for July 24, 2022.

Cooperstown has been the site of the Baseball Hall of Fame's brick building since the 1930s. Babe Ruth and Ty Cobb were part of the original class of recipients.

Oliva has been waiting 46 years since he played with the Twins to reach the select status. The American League batting champion his first two seasons, Rookie of the Year in 1964, a Gold Glove outfielder, and a .304 lifetime batting average ... still, Oliva was overlooked by the HOF for many years. Same with Jim Kaat. He won 283 major league games as a pitcher, was on two World Series teams and won 16 straight Gold Glove awards. Both Oliva and Kaat - who was Oliva's teammate and pitched for the Twins in the 1960s - have stayed active in baseball as coaches and game announcers.

With the Oliva news, Ron and his wife, Teresa, started immediately looking for options for traveling to the festivities in Cooperstown. It's not the easiest place to get to. They knew they didn't want to drive there, if possible, with the large crowds expected. They found a charter bus company in New York's capital city of Albany that had special hall of fame service trips to Cooperstown. The bus company took care of all required travel arrangements including lodging. To get to Albany, they had to fly from Minneapolis to Baltimore and then to the New York state capital. It was a 90-minute drive: 77 miles from Cooperstown to Albany.

The Tondryks tried to "take it all in" and enjoy the HOF weekend.

"In reflecting, four things come to mind," Ron said. "First, the induction speeches were very heartwarming with the stories of the seven elected players. The gallery of the Hall of Famers was so awesome. The third was the parade Saturday night, which included 48 of the living Hall of Fame members. The fourth lasting memory, undoubtedly, will be the roundtable discussion of Oliva, Kaat, and (David) Ortiz held on Monday."

Tondryk rattled off a list of "a few" of the baseball greats they saw, including Paul Molitor, Mike Schmidt, Dave Winfield, Goose Gossage, Lee Smith, Johnny Bench and Ozzie Smith. "It was great. All these guys were heroes of mine."

He did miss, sadly, not being able to see Henry Aaron, Al Kaline and some of the other HOF members who recently passed away.

But both Tondryks would certainly recommend a trip to Cooperstown for any baseball fan.

"It was worth it and wonderful," Ron said.