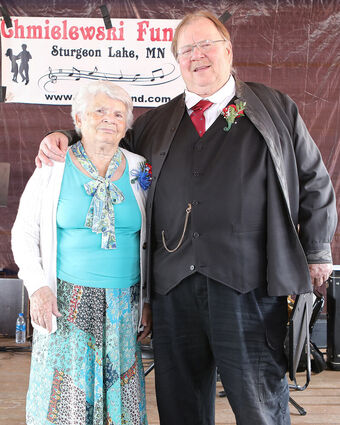 Shirley Magnuson, 83, has been selected as the female Outstanding Senior Citizen for Carlton County this year. She will be honored during a ceremony at noon at the Carlton County fair Friday, Aug. 19 in the Hartman Pavilion.

Shirley told of those cold days standing outside storefronts, faithfully ringing the bell for the Salvation Army's Red Kettle during the Christmas season.

"It would sometimes get down to 20 below," she said. "But I was prepared, I wore four layers of

Magnuson's philosophy about volunteering is about having fun helping others.

"You don't have to be talented," she said. "You still have a lot to give. When you are talking to a patient in a nursing home, you can give them a reason to live. Just give them a smile."

Shirley volunteered wherever she could over the years. Not being able to drive didn't stop her. She would ride her bike.

"I rode my bike for 40 years," she said. "People often didn't know my name. They called me the Bicycle Lady."

Now they are grandparents to 17 grandchildren and 14 great-grandchildren. The couple previously resided in Barnum, then Moose Lake, and have lived in an apartment in Cloquet for three years.

"My husband can no longer drive," Shirley said. "The bus service in Moose Lake was just two

days a week. We had to move to Cloquet to get bus service every day."

Over the years, Magnuson found many places to volunteer: nursing homes, assisted living homes, hospitals or just taking people on the bus to go shopping.

"I used to take people to Walmart shopping," she said. "They enjoyed it so much."

Shirley told one story of a little Finnish lady she took out for lunch as a volunteer.

"She was going to be 100 years old," she said. "I took her to lunch and paid for it. She ate more than I did! She was so funny in telling the story about her three husbands. She had outlived them all. That was on a Tuesday. She died the following Sunday."

Ruby's Pantry was another place where Shirley volunteered.

"It had to close when they couldn't get enough volunteers anymore," she said. "There was no one to take it over."

Shirley saw the need in the community when she volunteered for the Salvation Army food shelf.

"When you see those that come, you see the need," she said. "When you have an extra buck, put it in the donation box."

Church has been another volunteer opportunity for Magnuson.

"I taught Sunday school for years," she said. "One time, there was only one child that came. We had so much fun that he told the others. The next Sunday, the whole class appeared."

Shirley has had to cut back on her volunteering now to take care of her husband.

"I made that commitment 64 years ago when we got married," she said.

But she still volunteered to be a helper during Sunday school at church.

As she looks back on her life as a volunteer, Magnuson sees her real reason for that passion.

"I kind of did it for God," she said. "Volunteering has been my mission all of my life. Life has been a journey, but it has been a lot of fun."

It isn't often that there is someone that can do it all, from hands-on work in the woods, to organizing groups to complete a project, or both writing and performing.

Dan Reed, 73, of Automba in western Carlton County is that type of person.

Reed has been selected as the male Outstanding Senior Citizen of Carlton County this year and will be honored at the Senior Day program on Friday, Aug. 19, held at noon at the Carlton County Fair in the Hartman Pavilion.

In the midst of all of his work skills, Reed also finds time to volunteer in his community.

His most recent accomplishment was the highly successful fair-type Ma and Pa Kettle Days in Kettle River on Aug. 13. Reed has been active on the Ma and Pa Kettle committee for years but change was needed after the pandemic to get the community celebration back on its feet.

In past years, a couple were chosen to represent Ma and Pa Kettle, and Miss Kettle River and her court rode on floats down Highway 73 in a 15-minute parade. This year the committee decided to change to a "no-move" parade, where booths were set up next to the sidewalks along the highway. The people that came to Kettle River that day were able to walk along the sidewalks and stop and talk to the honorees, vendors, fire and rescue personnel and sheriff and learn a little more about antique tractors and ATVs.

"I really enjoyed visiting with the people," Sheriff Kelly Lake told Dan. That sentiment was repeated by both vendors and the people that came to see what this new type of celebration looked like.

Reed is an organizer and has often found himself heading up one group or another on a project.

Automba Township, where Reed lives, has benefitted from Reed's vision and skills.

Two monuments to that vision are an engraved stone near the Automba Town Hall and an open pavilion made from portions of a steel railroad bridge provided by Lawrence Lundin.

Part of those projects was raising the funds to cover the expenses. For the pavilion project, panels that were later mounted inside the roof of the open pavilion listed names of the families that settled in the area.

"A lot of people didn't understand it at first," Reed said. "I had to show people the concept so they could understand what it was all about. None of these projects would have happened without good neighbors willing to lend a helping hand with a belief that what we did was good for our community."

Because of his previous experience with the stone monument in Automba, Reed had the knowledge and knew the people that he needed to ask to help set up another stone monument to mark the site of the First Methodist Finnish American Church in the United States, located just off of Highway 27 on Walzak Road in Silver Township. The project was headed up by the Methodist church organization that were designating historic Methodist sites throughout the state.

Reed doesn't do these projects alone.

"There are lots of volunteers from the local area," he said. "But I also knew people who had the skills to do it."

Other commemorative celebrations that he organized took place across the road from the town hall on a field and at the American Legion Hall in Kettle River where he organized and recruited people to read the historical stories of past residents during Ma and Pa Kettle Days.

One of Reed's interests is the theater, and he learned all about it when he was a student at Barnum High School and UMD in his early years.

"My aunt Laverne exposed me to the theater world of New York City and all of those creative people," he explained.

The time came to develop that interest.

"Bruce Marshall, always a visionary, got me and several others interested in a play that he wrote based on 'The Kalevala,'" Reed explained.

That led to the formation of the Kalevala Theater Society. From there, Reed went on to produce, direct and perform the seven original plays that he had written about the immigrant experience. All were a work of love, not moneymakers.

"I barely broke even on those plays," he said. "We performed in auditoriums in the local school, the Kalevala Cultural Center, in Minot, North Dakota, Marquette, Michigan, Duluth, University of Minnesota, Fond du Lac College and on the Iron Range."

Another need that Reed sees in his area has been to straighten and strengthen the roadbed for heavy traffic on Highway 73 south of Cromwell. Reed, along with Jeff Dotseth, currently has organized a group of activists that are meeting and working on ways to present the idea to the Minnesota Legislature to obtain funding for the estimated multi-million project.

"That highway is a major link for our area," he said. "Improvement is needed for economic reasons."

Reed is very active in the Moose Lake Area Historical Society. His acting skills are often evident as he portrays major historical figures during programs or the Living History Cemetery Walk held in the fall.

He has also been one of the actors in the historical society's major fundraiser, the dinner theater held in October.

But he is most proud of the fire map marking the locations of the 1918 fire stories detailed in local history books.

Reed said that someone from the state history center from St. Paul came this summer and highly praised that map that Reed and Ross Anderson, another longtime member, had created.

"He said that no one had ever done such a complete map of the 1918 fire's impact in this area," Reed reported. 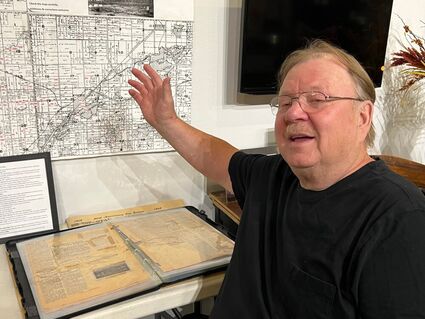 Dan Reed shows the map that he and Ross Anderson marked with numbers that correspond with stories in an index marking various sites of stories about the 1918 fire.

Anderson and Reed also spent six years making copies of news articles from the Moose Lake Star and Star Gazette from 1897 to 1930 that had been given to the local historical society by the state historical society.

Now, they are working with two more members, Natalie Frohrip and Lois Johnson, to index the news articles in categories, such as railroads, for future researchers that are looking for information about Moose Lake and the area in the early years.

As Reed looks back on his life and all that he has accomplished, he does not want to take the full credit.

"None of these things would be possible without each volunteer that helped," Reed said. "It is very much a community thing."

And Reed gives credit to people like his parents, grandparents and other community leaders.

"We stand on the shoulders of our forefathers, the Old Ones," he said. "We did not do this alone. Those are the people that gave us our strengths."