For first time in ages, contested race for sheriff 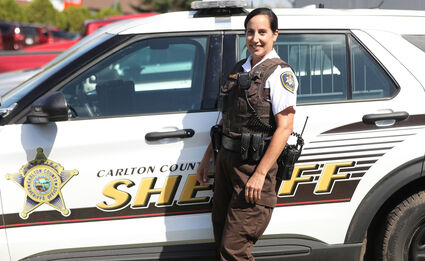 Sheriff Kelly Lake stopped in for a moment at the Carlton County Fair on Sunday. Lake is seeking her fifth consecutive term as sheriff in the general election Nov. 8.

For the first time in 16 years this November, Carlton County residents will face a choice when voting for sheriff.

First appointed Carlton County sheriff in 2005, Kelly Lake has experienced only one election challenge, coming in 2006, when she won 85 percent of the vote.

Since then, she's gone unchallenged. Until now. Lake is being tested by Jason Syrett, a 10-year law enforcement officer with the Moose Lake Police Department.

"Kelly's been in there since April 2005," said Syrett, 35. "My personal opinion on that is it's too long for a public official to be running a department."

Both Lake and Syrett are lifelong Carlton County residents. They spoke last week with the Pine Knot about a series of issues, including the $66 million justice center, their differing campaign styles, and their ideas about public safety.

Lake, 53, cited her record of service to the office and residents.

"My dedication to this county has never changed in 33 years (with the office)," Lake said. "It's still there, and it will continue to be."

Syrett's challenge has been a unique one. He's conducting his campaign through social media and word of mouth. He's not taking campaign donations. He hand-delivers campaign signs upon request and usually ends up talking with the homeowner

and their neighbors, too. Married with two young children, he said he doesn't want to concede to a summer of door-knocking. When he launched his campaign with a Facebook post, he said his phone blew up with messages.

"It was out of control," said Syrett (pronounced "sir-et"). "If Carlton County people are going to get out and vote, at least they'll have an option this time. I know the word is out."

Meanwhile, Lake has been running a more traditional campaign, being intentional, she said, about setting time aside from work duties. She appeared daily at the county fair last weekend, and has been a regular at parades and summer celebrations. She's enjoying the campaign trail.

"I have people coming up to me and talking more than they would have (in previous years)," she said. "It's been a great opportunity to be able to reconnect with some people. It reminds people the office of sheriff is an elected position."

As the challenger, Syrett is in position to push for change, and that's what he's doing.

The "kicker" in his desire to run for the office, he said, was the arrival of a new justice center. Approved by the county board in July, it's planned to include new jail and courthouse facilities, and will be located along County Road 61 near the county's transportation building.

"I'm against it," Syrett said. "I don't think we need to build a Taj Mahal jail."

He said he's read the hundreds of pages of study on the county's website, but that county officials have done a poor job informing taxpayers about the project. Of the six proposals presented as options, Syrett said he favored building a 72-hour hold facility at roughly two-thirds the current cost.

"People are mad," Syrett said, before referencing the upcoming Nov. 8 referendum, in which voters will choose how to pay for the project, either using a half-percent local option sales tax or financing through property taxes.

"A lot of people are under the assumption they're going to vote for this new jail," Syrett added. "But they're not."

Lake objected to the idea that the public has been under-informed. She described several years of public meetings and discussions, and the employment of a citizen advisory committee, featuring two citizen appointees from each of the five commissioner districts.

"We've been looking at this from every angle," Lake said of the nearly 45-year-old jail. "We knew it was not going to last forever."

1) The Minnesota Department of Corrections issued a sunset authorization letter in 2020, notifying the county it would no longer be authorized to hold people after summer 2023.

2) The state judiciary and Sixth District Court also came to the county to remind it of what the courts had been saying for years - that the 98-year-old courthouse no longer had enough space or security to meet the needs of modern times.

Together with a "huge increase" in female offenders, Lake said, rising mental health complexities, and increasing violent crime and drug offenses, the county used those developments to land on the idea of building a joint justice center that would encapsulate both a jail and courthouse.

"We began studying this when we started experiencing some overcrowding, some very high inmate counts," Lake said of talks that originated as far back as 15 years ago.

"It wasn't me looking at it in a vacuum," she added.

Remodeling the current facilities proved not feasible, given construction challenges and modern requirements, Lake said. And settling for a lesser project would mean having to commit to years of added costs to transport and house inmates elsewhere.

"And no matter where they go, they'll be coming back into the community to live," Lake said. "What assurances do we have to help ensure they'll not be committing any more crimes when they come back? A (72-hour hold) does not have any programming within it."

The county has analysis showing that in the long run the more robust project will make for lower associated costs.

Forecasting for needs out to 2040, the new facility will be built to house 80 offenders, nearly double the current jail, and include a 16-bed unit for "justice-involved females" to meet the demand locally and from throughout the region and state. Other jurisdictions will pay a daily per diem to house female offenders in Carlton County. But it's more designed to meet a growing societal need than to be a moneymaker, Lake said.

"We realize this is an enormous undertaking," Lake said. "We've never built a facility like this. We want to make sure they're right-sizing it, so that it will last the county for many years to come."

Syrett wondered aloud if the new jail could be "stopped" were he to be elected.

"I would like to revise the new jail," he added.

He also wants to reinstate the county's Community Emergency Response Team, a SWAT-like program that was suspended in the wake of a 2019 shooting in Moose Lake that paralyzed the subject of a search warrant. That shooting cost the county $4.2 million as part of a $6-plus million civil court settlement that assumed no fault on the county. Presently, the county relies on a mutual aid agreement with St. Louis County to help respond to situations such as confronting an armed and barricaded suspect.

"This county and deputies are well-capable of having a very good CERT [team]," Syrett said. "I would get that CERT [team] back on track."

"I'm going to leave it at that, because I don't want to give away what goes on in Carlton County," he said. "People don't need to know how many squads are on at night, but I do know. That's our job. I would like more patrol squads, more deputies responding to calls."

Syrett said he could do it without adding staff.

When asked about the community emergency response team and patrols, Lake reflected on the 53-person office, which includes jail personnel, court security, 911 dispatch, emergency management functions, and 24 licensed law enforcement officers, including herself.

It's unrealistic to increase routine patrols without adding deputies, she said, while noting the county already employs increased patrols on a strategic basis.

"We have targeted patrols when we identify crime trends," Lake said.

As far as the community emergency response team, she called participation voluntary and said numbers don't currently support its revival, even when including officers from Cloquet and Moose Lake police departments.

"Even when we had a CERT [team] we would rely on mutual aid from St. Louis County," Lake said, noting participation comes with a lot of added training. "I would like to bring it back if we can get enough membership. It's something to work through amongst the county agencies right now."

Given an opportunity at final thoughts, Lake emphasized her willingness to lead.

"I still feel like I can contribute a lot," she said. "I am not ready to retire yet."

Asked if his intent was to raise issues or win the race, Syrett said, "Both." 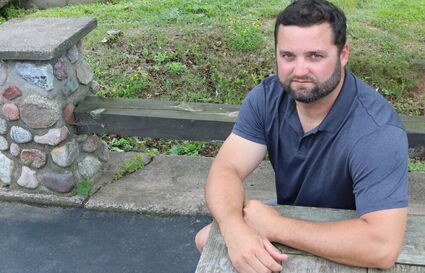 "If I talk about doing something, I do it," he said. "I feared that in Carlton County no one was going to step up and do it. I would definitely change the county from a law enforcement perspective."

Editor’s note: The passage related to the Minnesota Department of Corrections’ sunset authorization letter in 2020 was clarified on Aug. 26, 2022, to be more definitive, after Lake explained there was no possibility for the current jail to be retrofitted without being torn down and rebuilt due to modern requirements which weren’t in place when the current jail was constructed decades ago. “There does not appear to be any further options to extend the life expectancy, or operational efficiencies of the existing facility,” the Department of Corrections wrote in its Jan. 2020 sunset letter to Lake and the county. The story first published Aug. 25, 2022.