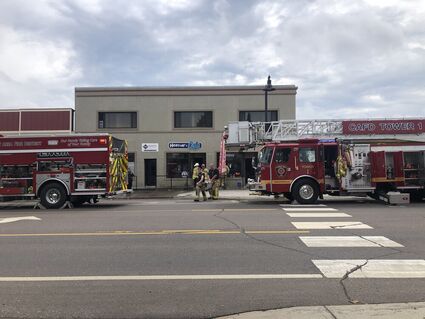 Firefighters from the Cloquet Area Fire District spent hours at 1302 and 1304 Cloquet Avenue, which includes Heather's Cafe, after getting a call about smoke inside. They found an electrical issue was the culprit.

Where there's smoke, there's fire ... except when it's electrical and firefighters turn the power off.

That's what happened at Heather's Cafe in Cloquet Thursday, Aug. 18. Firefighters from the Cloquet Area Fire District spent hours at 1302 and 1304 Cloquet Avenue, after getting a call about smoke inside. Traffic down Cloquet Avenue was rerouted while they were there.

While there is likely smoke damage as well, there was no water damage. Pieces of plaster and ceiling tile littered the floor of the Nexus-Kendred Family Healing office Thursday afternoon as firefighters headed back to Station 1, and pink insulation was visible on the floor at Heather's next door.

Ethan Thaler, 18, was working as a dishwasher when smoke filled the building. He said there were about seven tables of customers when the owner of Heather's announced the fire, and that everyone was evacuated safely.

"She said, 'We've got smoke. I need everyone out. Forget the bills,'" Thaler said.

Owner Heather Culbert said she hopes to reopen for business on Monday, Aug. 29, on Facebook. 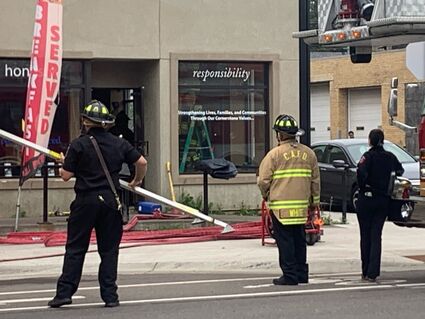 Frank Gothard purchased the building in January, and praised the CAFD response, which he called "phenomenal."

"Jason Maki did a great job communicating and helping me understand what happened," Gothard said, explaining that a junction box connected to an exterior light fixture was the culprit.

The building has space for four businesses downstairs; two were affected. He wasn't sure what it will take to repair the damage yet, but he was looking on the bright side.

"Everyone got out safely, that's all I care about," Gothard said. "It was the best ending to what could have been a potentially bad deal."

Editor's note: This story was updated on Aug. 25 to reflect a new opening date for Heather's Cafe.