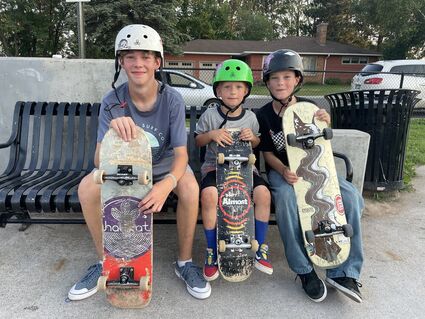 For kids, it’s: Have Fun. Squeeze every last pinch of summer out of Summer before the reality of September and Back-to-School accountability and order takes over.

Accountability and Order. …as mentioned, even adults never quite lose the aversion to either.

Earlier this week, at the skatepark on the corner of 14th Street and Prospect Avenue, just feet from where this writer once caught a Home Run Ball hit over the fence by a CHS baseball player named Something Johansen in about 1975, a gaggle of beautifully sweaty, stinky, bruised, mildly bloody, scabby, varyingly self-conscious kids — the same age I was when I caught that ball — zipped up and down the ramps, plummeted down, Dropped In, Ollied, fell down, bounced-back-up, complimented each other, teased each other, tested each other, respected each other, encouraged each other, implicitly threatened each other and, poetically choked out some of the few remaining magic moments, never-to-be-forgotten, of summer, 2022.

All the Adults Insane.

The older of them dimly aware that, soon, they’d be expected to weigh in. Choose a side.

The younger of them dimly aware that, soon, they’d be the older of them.

Parents at the perimeter, agog.

Somewhere in a yard a half-block away, a dog barks from her fenced-in universe and her voice ebbs, not echoing — nothing for the sound waves to bounce from. So she barks unendingly, hoping to hear herself.

“How long you been skateboarding?”

“Since last May or somewhere around there. Yeah, May, I think.”

Mason’s two younger brothers lean in for his answer.

“I’m decent and better than I was last May.”

“Good answer. …I wish I could say that sentence and not have it be a lie.”

“Collin—his brother.” He nods at Mason.

“Same as him,” he nods at his brother again.

Collin nods. His face gleams with sweat. His shins are a map of bruises and his hip is abraded, slightly bloody. Elbows.

“Sometimes, but only when it hurts.”

“So you’re the middle kid. What’s your name?”

“I love it. We all do. We’re so lucky. In this small town to have a skate park like this…Without this, there’s no way we’d have progressed this far, this fast, and you can tell, day-by-day that all of us are getting better.”

Then he adds, as if daydreaming.

Keep in mind, the kid is 10. I’ve always been decent with words, but when I was 10, I’m pretty sure the phrase: “there’s no way we’d have progressed this far, this fast,” was in my tool kit.

Then the three of them are off, gliding and lilting and balancing and airborne and tumbling along with the dozen or more other Mini-Maniacs and their elder tutors.

The smell of Locker Room wafts in the air.

Erin Goetz is the mom.

“Gotta admit, I was a tad apprehensive when they all started to get into it. It started with them watching YouTube vids and eventually I realized, this is ridiculous; these boys should be outside all summer, not watching videos of other people doing what they could be doing. “

“Not many. Except for the concussions.”

“Yes. Even with helmets.”

At this, the 5-year-old, Collin, the Eves-Dropper chimes in,

“Yeah, I got a forehead concussion!” He taps his forehead to show. Like the scene in JAWS when the shark hunters are on the boat, drunk and comparing war scars.

We watch her kids, and everyone else’s, for 10 minutes and the sound of wheels and the visual of youth-in-motion, and the feel of the humid August night planting sweat on the skin and not extracting it, like Arizona heat does, is, somehow, a poignant reminder that not long from now, once the geese decide, the very same location on Planet Earth will be absent these sounds, smells and sights, the air dry and cracking, cold; and this same time of day will be night.

“They grow up, don’t they,” Erin says, herself the age of my own.

“They do if they’re lucky,” and that may have been too much, so I add, “Yours are clearly lucky, and so are you.”

When the mosquitos descend,

The adults take refuge in

While the kids keep sweating and jamming.

At the old park at Wentworth,

And mourn their bodies gone cold

And the hearts of their Mothers and

Fathers still break, for the

Lives once young and as bold

As the kids at the Skate Park Redux …

Cloquet‘s Parnell Thill is a previous “Columnist of the Year” winner in Minnesota. His opinions are his own, as are a few of the moments he describes to make his point. Contact him c/o [email protected]