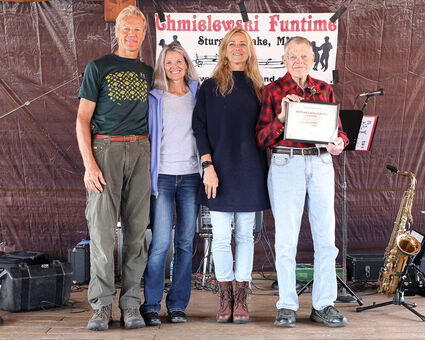 The Solwold family farm was recognized as the Carlton County Farm Family of the Year at this year's Carlton County Fair. Pictured, from left, are Mychal and Lori (Solwold) Franklin, Julie Solwold and Don Solwold of the Quartermaster Buffalo farm near Esko.

American buffalo have roamed Don and Marlene Solwold's farm near Esko for 48 years.

Marlene died of Alzheimer's 10 years ago, but Don, 89, still has a small buffalo herd and enjoys spending time with them, spraying them with nontoxic fly spray, brushing their dark furry coats and talking to them.

The Solwold family was named the Carlton County Farm Family of the Year and was presented with the award at the Carlton County Fair on Aug. 19. The Farm Family recognition program, which has honored Minnesota farmers since 1979, is coordinated by University of Minnesota Extension, the College of Food, Agricultural, and Natural Resource Sciences and the College of Veterinary Medicine.

"I am real grateful to be presented with that award," said Solwold in an interview in his home last month. "I've looked at the list of previous farm families and feel honored to be in that same group."

The Solwolds live on historic property. The original homestead of 160 acres was purchased from the railroad by a Finnish couple with three children in 1873, Solwold explained.

"The government gave the railroad every other section of land back in those days," he added. "The railroad sold the land to settlers for nominal prices."

Solwold went on to explain that the name of the family was Palkie, and a grist mill was set up on the property to grind grains for the farmers. That grist mill was dismantled and moved to Esko, where it is now a museum.

The wide vistas of the Red River Valley is where Solwold grew up on a homestead that his father bought in 1902. Solwold joined the military and became a pilot for the U.S. Air Force and was based in Great Falls, Montana.

He later joined the Air National Guard and came to Duluth as part of the 148th Fighter Wing in 1974, and bought the farm where he still lives. He retired from the military as a colonel in 1991.

"I was blessed with a career in the military," Don said. "I had flying status for 25 years. I worked with a lot of fine people."

Solwold's military experience is noted in the name of the farm, Quartermaster Buffalo.

He explained that the quartermaster is the officer who secures food and provisions for the troops. Contracts were made with hunters to furnish buffalo meat in past times.

The Solwolds were interested in raising buffalo - also known as bison - and purchased their first pair from the Buffalo House, a nearby restaurant where buffalo meat was featured on the menu. At that time, "the kids," as Solwold called them, had their own buffalo herd.

The Solwolds built up the herd until it reached 90 animals. The meat was processed on site and was purchased by the Buffalo House, Duluth Grill and St. Luke's Hospital.

Later, the buffalo were taken to Solwold's fellow 148th Fighter Wing member and friend who processed the meat in his commercial operation in Floodwood.

"At first, St. Luke's limited the buffalo meat to its employees, but then included the meat on the menu for the patients," Don's daughter, Lori, explained.

The Solwolds raised a family of five children. Daughters Julie Solwold and Lori, and her husband, Mychal Franklin, are still active in the business.

"There are always fences to fix and work to be done," said Franklin. Julie Solwold takes care of the accounting.

The Solwolds also worked to establish the Minnesota Bison Association in 1992 and became charter members.

"I was president of the association for two terms," said Don. "I am still a member."

The Solwolds found they were providing for a trend when they began their operation. People were looking for healthier foods.

"When we first started, everyone wanted a steak," said Solwold. "Now they like burgers better. That was good for the industry and good for people too."

Solwold explained that buffalo meat is leaner than beef and not marbled with as much fat. That reduces the amount of cholesterol in the meat.

Buffalo meat tastes the same as beef, Solwold said. It grew in popularity once people learned how buffalo are raised.

The buffalo range freely on the farm and eat grass in the warmer months and hay during the winter, he explained. The buffalo are not confined to a feedlot the way some cattle are. There is no reason to add hormones and other additives to the feed.

The buffalo are also fed screenings from wheat brought from North Dakota to the grain elevators in Duluth.

"The screenings are grass and weed seeds that are sifted out of the wheat," Solwold explained. "It has been the most nutritious element in the diet of the buffalo over the last 100,000 years. They do well on it." 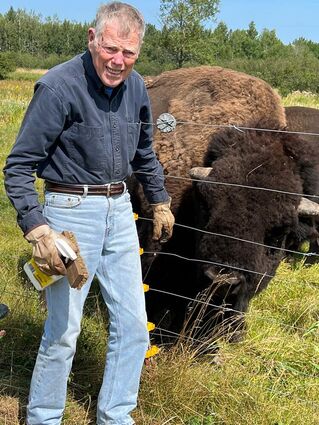 Don Solwold sprays Rowdy with a nontoxic liquid that keeps the flies away. He hand-raised the bull, which still comes to him when he appears.

Solwold said he started cutting back on the number of buffalo in the herd 10 years ago, and now has 16 head, calves included.

The meat is no longer processed; he just sells the calves to other buffalo farmers.

After looking back on all the time he spent on raising buffalo, Solwold realized it would not have been worth the effort if he had not enjoyed it.

"If I had put a value on my time, I would probably wish that I hadn't done that," he said. "But I was happy to put my time into it, it is work well done and there is an entertainment aspect to it. I love it."

"I thank the Lord for good health every day," he said. "As long as I have good health, I'll continue to do it. When I can't do it, I'll turn it over to my children and grandchildren. As long as they want to do it, that's fine with me."