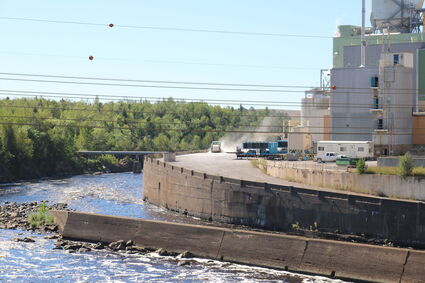 A street sweeper appears behind the Sappi paper mill, where the pipeline carrying water from Lake Superior stretches across the St. Louis River.

There's a saying that goes around Sappi: folks who've worked in the boiler room for 40 years think the paper mill makes steam.

It's an insightful joke about the processes within the mill which require heating chilled Lake Superior water to meet the needs of pulp and paper-making.

It's also one that's taken on renewed meaning at a time the mill is striving to reduce its energy usage and water consumption.

"Back in the late 1960s, we used over 40 million gallons of water per day," said environmental manager Rob Schilling. "We're at 17 to 17.5 million gallons per day now, so major efficiencies over the past 50 years."

But big gains have yielded to today's harder-won solutions and efficiencies. When the Pine Knot sat down last week with four of the mill's engineers and sustainability leaders, they talked about how solutions to curb water can come down to duct tape and baling wire. Teams of engineers and operators first look to improve a process to deliver results, rather than install a new piece of equipment to solve problems.

"Every production process has waste," said Justin Finke, process improvement black belt, meaning he's an expert in the Lean Six Sigma waste-elimination strategies adopted by the mill and found throughout business and industry.

"Truly finding ways to increase production or hold it steady while reducing (industrial, solid and water) wastes," Finke added, "that really is the key to sustainability."

The mill has met major sustainability challenges in the past. Faced with an on-site landfill nearing capacity earlier this century, the mill began supplying farmers with its used lime and extended the life of the landfill by more than 30 years.

When it comes to water, the current goal is a reduction in water use by 500,000 gallons per day, a figure aimed at annually reducing energy and carbon emissions by 1 percent each.

To meet the goal, the mill's engineers have settled on two ongoing projects: one reduces the frequency of a evaporator flushing process, saving 8 million gallons a year, and the other will attempt to recover wastewater from the kiln area that is currently piped back to the Western Lake Superior Sanitary District in Duluth for treatment.

"We've done many of those projects through the years," said Dan Menor, lead sustainability ambassador. "We're always striving to continue to reduce that use."

Alycia McWilliams, environmental engineer, described another project that illustrates how a simple correction can affect an existing process.

"We found out we were wasting steam out of our stacks, out of our chute for the digesters," she said. "So we reduced pre-steaming and saw significant savings there."

Despite its ongoing efforts, Schilling described the mill's water arrangement as one of its prevailing "weaknesses." Neither the lake nor the St. Louis River alone can consistently meet 100 percent of the mill's demand for water.

"We need both systems in operation to get enough water to keep the facility running," Schilling said. "It's one of the reasons we have objectives to reduce water use - to make our system more robust and reliable."

A tour of the exterior grounds revealed the mill's connections to its water sources. There's a dam across the river. Drought conditions last year forced the mill to close gates and reduce its take from the river.

"The (department of natural resources) will send us a letter or give us a phone call to say, 'Sorry, the river is at low flow and in order to protect the resource you can't have as much water,'" Menor said.

Also visible on the backside of the mill is a pair of pipelines to Lake Superior stretching across the river. Water is transported 25 miles in both directions, going from a couple miles off the end of Park Point in Duluth and up Thompson Hill, where it is gravity fed to the mill. Other than 5 percent that evaporates, wastewater is returned to the WLSSD for treatment.

"A lot of people focus on how much water we use," Schilling said. "But they ignore or don't know that all that water goes right back and it's continuously recycled within the watershed."

Unlike the 39-degree pristine lake water, the river water must pass through a clarifier to pull out organics and murkiness. Clean, pure water and a bleaching process are critical for making both craft pulp for paper and dissolvable pulp for textiles.

"We want the pulp super-white for both," Menor said. "The most important thing is very consistent whiteness."

Unlike some of Sappi's other mills in different parts of the world, the Cloquet mill is located in an area with what's considered abundant water resources. Because of that, the mill is under no corporate dictate to continually address its water consumption. But the local officials explained that it doesn't keep them from having a mill target. To that end, not every solution starts as a Red Green-style experiment. 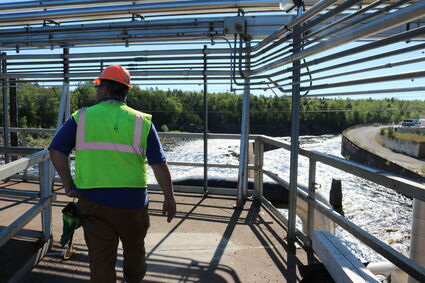 The city of Cloquet and Sappi are part of a $5 million state bonding request that, like a lot of things from the last legislative session, failed to get finished. The project would increase reliability and capacity of the Lake Superior water system, Schilling said.

Until then, further gains are likely going to be up to the employees and a culture of problem-solving. Finke compared it to driving a muscle car to work as a commuter, and then creating and finding time to make it better.

"The car's just got to run," he said. "But you could spend hours and hours fine-tuning and tweaking all sorts of things about your car."

Menor said he wouldn't have it any other way.

"Anything we can do to make this whole process more sustainable for more years is valuable to the community," he said. "We treat our people right, we treat our planet right and we'll be prosperous. Water is a portion of that."