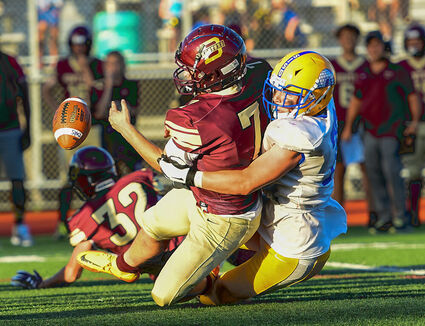 Esko senior captain Alec Peterson had two sacks against the Hunters during Friday's game, this one caused a fumble.

The Esko football team wasted little time in sending an early-season message to the rest of Section 7AAA that it is a team to be reckoned with after pounding Duluth Denfeld, 53-0, on Friday night in Duluth.

Eskomos quarterback Ty Christiansen had a big night, running for 87 yards on three carries, and passing for 72 yards and one touchdown in leading the offense.

"Offensively, we really want that triple threat in our option running game and having Ty at quarterback helps to complement our running backs," said Esko coach Scott Arntson. "Other teams will need to stop all three phases of the option and not just focus on one or two of our backs."

On the ground the Eskomos busted loose for 294 rushing yards on 28 carries - 10.5 yards per carry.

Leading the rushing offense were Christiansen and Jacion Owens, who each had 87 rushing yards. Nolan Witt also had a solid game on the ground with 46 yards. Owens scored two touchdowns, and it was one each on the ground from Witt, Makoi Perich and Joey Antonutti.

The Eskomos added 98 yards passing on just five receptions for an average of nearly 20 yards per catch. Carter Zezulka had 37 yards receiving, Perich chipped in with 35 reception yards and Jace Stewart caught one pass for 26 yards. Zezulka had the only catch for a touchdown in the game for Esko.

"A big key to our being able to run the ball and pass the ball is having a good offensive line," said Arntson. "We have eight or nine guys that we can play. I've told the line that we have all the right parts; we just need to keep working at finding the right spots to put the guys in."

Esko's special teams were also pretty good as they had 117 yards on just three punt returns. Perich had two returns for 99 yards, including one for a touchdown, and Sam Haugen added one return for 18 yards. 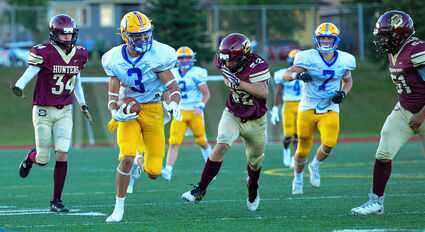 Defensively, the Eskomos allowed only 149 total yards to the Hunters with Antonutti leading the defense with nine tackles. Both Perich and Witt added five tackles each while Christiansen recorded a pair of interceptions and Isaak Sertich also added an interception.

"Going into each game we focus on being the best Esko team we can be and the competition gives us a chance to judge ourselves," Arntson said. "Heading into the Denfeld game our goal was to avoid any turnovers and have a penalty-free game. We ended up having two turnovers and 80 yards in penalties and against top teams that won't cut it, so we still have work to do."

Esko will try for their second win of the season on Friday night at home against the Mora Mustangs. Mora fell 26-20 to Grand Rapids last week in Mora.