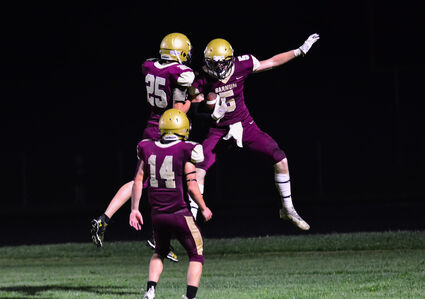 After opening the season with a road loss, the Bombers bounced back in fine style Friday with a 51-7 trouncing of East Central in Barnum.

"Our kids did a nice job and were ready to play," said coach Rob Minkkinen. "The boys played at a high level. I was very happy with their effort the whole game."

Quarterback Hayden Charboneau kicked off the scoring in the first quarter with a 7-yard touchdown run, followed by a 2-point conversion pass to Caden Sheff to make it 8-0. Midway through the quarter Charboneau hit Ryan Manahan on a 14-yard scoring strike and Devon Jones tacked on a 2-point conversion run to push the lead to 16-0.

Before the first quarter ended, Charboneau slipped a 3-yard pass to Carlos Beckstrand for a touchdown; a 2-point conversion by Cole Laitinen made it 24-0 after just one quarter of play.

"Our offensive line really set the tone for the game," Minkkinen said. "They finished their blocks. Once we got the running game going, it opened up the passing game."

In the second quarter, Charboneau found Beckstrand for a 70-yard pass and run for a touchdown, making it 30-0. Although East Central got a 70-yard pick 6 to cut the lead to 30-7 with an extra-point kick, the Bombers added two more scores before halftime. The first score was by Laitinen on a 1-yard touchdown plunge with Jones adding the 2-point conversion. The second was a Charboneau 47-yard touchdown pass to Sheff, with the extra point kicked in by Layne Wickstrom for a 45-7 lead.

The Bombers changed the game plan in the second.

"We had a lot of yards passing and rushing and at halftime we pulled most of our starters," Minkkinen said. 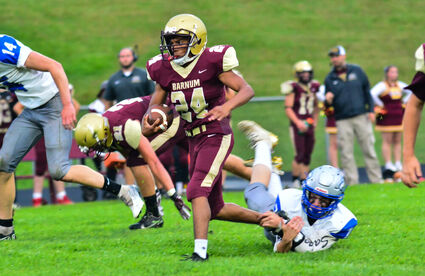 Barnum's Gavin Anderson breaks through a tackle on a run play as the Bombers hosted the East Central Eagles on Friday night.

Barnum scored the final touchdown of the game in the third quarter on a Keenan Head 6-yard touchdown scamper for the final of 51-7.

Charboneau was 11 for 14 passing, which was good for 233 yards and four touchdowns, all in the first half. Sheff caught five passes for 109 yards and a touchdown while Beckstrand added four catches for 101 yards and a pair of touchdowns. Gavin Anderson rushed four times for 53 yards while Jones and Eli Gilbertson both had 40 yards on the ground.

Defensively, Laitinen had seven tackles, forced a fumble, and Head finished with five tackles. Mark Hall and Beckstrand each had four tackles, including two for losses.

"Our defense played great and we had a solid day on that side of the ball," said Minkkinen. "As a group, our linebackers played fast and hard."

The win improved the Bombers' record to 1-1. This Friday they have a date with the Braham Bombers in Braham.