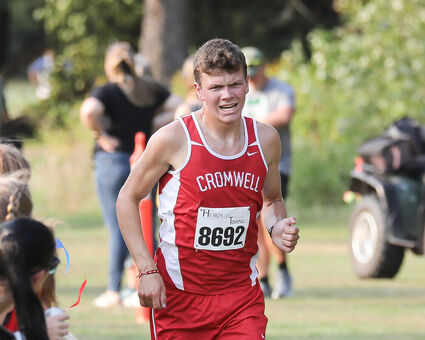 Cromwell-Wright's Noah Foster runs to a second-place finish at Thursday's Dan Conway Classic in Superior. Foster finished with a time of 16:57.5.

Local cross country teams got a firsthand look at almost all the other teams in the area last Thursday at the Dan Conway Classic in Superior.

Held at Pattison Park Golf Course, the Conway Classic was an important race on this year's running circuit because the Swain and the Milaca races have both been canceled. There is speculation that those races may not be brought back, so having the Classic was a vital event for local runners.

Duluth East captured top honors in both the boys and girls races on a day when hot, humid weather made for tough running conditions.

"I warned our runners a couple of days before to make sure they start to hydrate up," said Moose Lake/Willow River/Barnum boys and girls coach Adam Whelan.

Local Carlton County area runners acquitted themselves in both varsity races. The boys winner was East runner Oliver Miatke in a time of 16 minutes, 34.5 seconds. Cromwell-Wright's Noah Foster was second in a time of 16:57.5, while Cloquet's Miles Fischer was third in a time of 17:20.3. Esko's Ben Meysembourg also ran a great race and finished fifth with a time of 17:27.7.

Moose Lake/Willow River/Barnum, led by a 12th-place finish from Shawn Bailey and 19th from Murray Salzer, finished third in the event with Cloquet taking sixth and Esko finished seventh.

"Shawn went to state last year and he's got the racing mentality," said Whelan. "We have four seniors and they are a core group that helps out in teaching the younger runners about cross country."

The Lumberjacks got a super race from Fischer, which was good for third. Their sixth-place team finish was also aided by Calvin Snesrud's 24th-place finish out of 77 boys finishers in the varsity 5-kilometer race.

"I think our team ran well at the Dan Conway Race," said Cloquet coach Chandra Allen. "Miles Fischer and Calvin Snesrud have been the season leaders for us."

Esko was led to their seventh-place finish by Meysembourg, but they also had impressive efforts by Spencer Hipp and Alec Halverson who finished 20th and 22nd, respectively. Ethan Gamache and Joel Barta rounded out the scoring for the Eskomos.

Foster had an excellent race as usual, but the Cromwell-Wright Cards were not able to field enough runners to have a team score.

Carlton-Wrenshall's boys team also had things to be excited about as Jack Riley finished in ninth place with an impressive time of 18:04.7.

"The boys are all running well and I feel they are right where they should be right now," said Raptors coach Brenda Knudsen. "Jack Riley is our lead boys runner, and the other boys are running within a minute or so of each other, so they are bunched up nicely."

Carlton/Wrenshall had four runners score points, but five were needed in order to gain a team score. David Tuttle, AJ Olesen and Gavin Gibson all scored points for the Raptors.

In the girls 5K race, Cloquet was the top local team with a fourth-place overall finish. Moose Lake/Willow River/Barnum also had a strong finish by taking fifth place. Carlton/Wrenshall, Cromwell-Wright and Esko all had runners competing in the event, but did not have enough runners to be considered for a team score.

Key for Cloquet was the fact that they had three runners who finished in the top 25. Bri LaCore was 21st, Keanna Simula was 23rd and Elise Cawcutt took 24th. The Rebels top runner was Amelia Olson in 22nd.

"Brijette LaCore, Victoria Nelson, and Keanna Simula have been our leaders on the girls team," said Cloquet's coach Allen. "Watching the younger runners continue to improve and work together during workouts and races has been exciting."

The Rebels also had a solid day, and Whelan is excited about their potential. 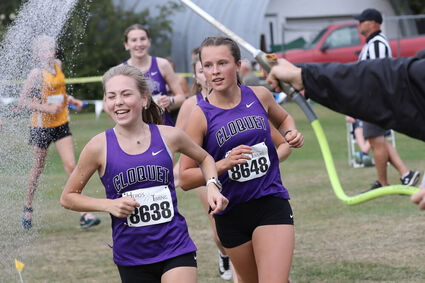 "We have a good group of kids," said Whelan. "Amelia Olson has looked strong, but Danica Wyman, Brooklyn Wasche, Olivia Jutila, Ella Heaton, Shannon Granquist and Izzy Dewey are all working hard for us."

While Carlton/Wrenshall did not have a complete team score, those who did run ran well.

"I thought everyone ran well, especially since it was a fairly hot day again," Knudsen said. Beyond Sara Cid's 14th-place finish, her sister, Abby Cid, also had an impressive race with a 28th-place finish and the younger runners for the Raptors ran well in their respective races.