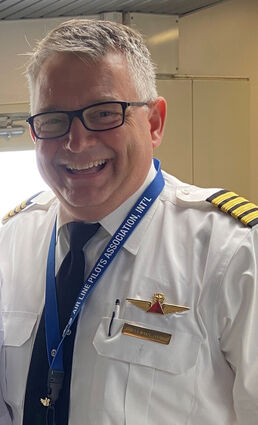 Dan was born Nov. 29, 1964, in Cloquet, the son of Eugene and Shirley (DeRosier) Stowell, the youngest of five children. He married Lynn Pink on July 12, 1997, in Shakopee. Dan graduated from Cloquet High School and then the University of North Dakota with a degree in commercial aviation. Dan always wanted to be a pilot, securing his pilot's license in high school before he had his driver's license. He realized his dream of being a pilot, first with Mesaba Airlines and then UPS, and since 1998 was with Northwest Airlines, now Delta Air Lines, achieving the rank of captain. Dan flew domestic and international flights.

He had many hobbies and interests, including golfing, fishing and hunting, being on the lake boating and spending time up North, a love of finance, and traveling.

Dan was generous and loved hanging with his friends and family. He had a practical joker sense of humor, was upbeat while being easygoing with a competitive side. He was a gadget guy and very creative, and he also enjoyed coaching Noah. Dan's outgoing, infectious personality led to many close, decades-long friendships with people from all walks of life. Dan was very proud of his kids, and was very supportive of Lynn ... he left too soon.