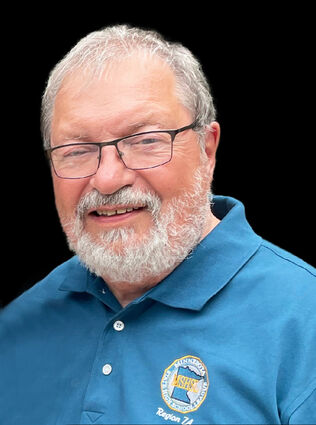 Julian “Bert” Bertogliat, 78, of Esko passed away peacefully and pain-free Sept. 30, 2022, in Essentia Health-St. Mary’s Medical Center in Duluth. He was born Sept. 26, 1944, in Waukegan, Illinois to Dominic and Rose (D’Andrea) Bertogliat. On June 17, 1967, he was united in marriage to Sharon Gentile in Keewatin, Minnesota.

Julian graduated from R.L. Downing High School in Keewatin in 1962. He attended University of Minnesota Duluth, where he received his bachelor’s degree in biology and a minor in geology in 1966. He received his master’s degree in science from University of Wisconsin-Superior. Julian began his career in Goodridge, Minnesota, teaching biology and geology, and coached football, basketball and track. In 1967 he and his wife moved to Esko, where he continued teaching and coaching and served as athletic director. After retiring from a 30-year career in the Esko school district, he served as executive secretary of Region 7 of the Minnesota State High School League for 20 years.

Julian received numerous awards recognizing his years of service. In 1986 and 1999 he was named the Region 7A Athletic Director of the Year, and was inducted into the 2013 Polar League Hall of Fame, 2016 Minnesota Athletic Association Hall of Fame, and 2018 Esko Sports Alliance Hall of Fame. In 1998 a special achievement in Julian’s career was the partnership formed with St. Mary’s Duluth Clinic, to provide orthopedic surgeons as team doctors and a certified athletic trainer. This was the first hospital-clinic-high school partnership in the United States and is now replicated by countless high schools across the country.

Julian was active in the Esko community as well. He served on the Esko hockey board, Esko sports alliance, and served on the Esko school board for many years. Julian’s passion was making Esko the best place to raise a family. When he wasn’t working, Julian enjoyed cooking (pasta Sundays), hunting at the Deer Lake Hilton, fishing, summers at Island Lake and attending any sporting event that his grandkids were playing at that moment.

Julian was preceded in death by his parents; son Tony; sisters Gloria Lott and Jeannine Karandos; father and mother-in-law John and Charlotte Gentile; and brothers-in-law Dick Gentile and John Lott. He is survived by his wife, Sharon; son Jesse (Sarah) of Minnetonka; daughter-in-law Michelle (Cory Kubis) of Esko; grandchildren Mario (Brittney Dusek), Isabella, Olivia and Stella of Minnetonka, and Tia and Gino of Esko. Julian also had a special place in his heart for Cory’s two sons, Carter and Caden Kubis; and many nieces, nephews and his granddogs, Peanut, Roo and Anze.

Visitation: 1 p.m. until the 2 p.m. Memorial Mass Monday, Oct. 10 at Queen of Peace Catholic Church in Cloquet. A lunch reception will follow in the Church Parish Hall. To leave an online condolence for the family, visit http://www.nelsonfuneralcare.

In lieu of flowers, donations may be made to the Julian Bertogliat Scholarship Fund. Thank you.