'Momma, this one's for you' 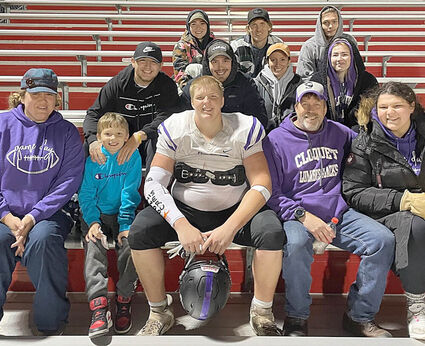 Cloquet High School senior Perry Goad (center front) played the game of his life Friday in honor of his mother, Holly, who died the day before. Although his mom couldn't be there, the rest of Perry Goad's family watched him play Friday, including his dad, his four older siblings, their partners and a nephew.

Lying in a hospital bed last Monday, Holly Goad told her youngest son, Perry, to keep up with football while she was there.

Perry kept that promise. Holly died Thursday, Sept. 22, and the Cloquet senior played one of his best games Friday night, a contest the Lumberjacks won 14-8 over Duluth East.

"I promised my mom I'd do my best to make her proud," the Cloquet senior said.

He wore a special sleeve on his right arm Friday. "Momma, this one's for you," it reads, with a heart below the word "Momma" and an orange multiple sclerosis ribbon at the bottom.

During a break from practice this week, Perry talked with the Pine Knot, saying he was thinking of his mother throughout the game. He described how he felt physically stronger Friday, less affected by the usual fatigue during the game.

"He, and the other kids, were inspired," head coach Jeff Ojanen said. "As an offensive linemen, when your name doesn't get called, it means you're doing a good job. And we didn't have to say Perry's name, maybe at all, because he was doing his job."

Holly loved coming to his games.

"I'd get home and it was all she'd talk about," Perry said.

Holly Goad was diagnosed with MS in 2009, and had battled the disabling disease of the brain and spinal cord over the years that followed. But infection and complications were too much for her body last week. Holly passed away while Perry was at football practice.

His father, Mark Goad, called one of the football coaches, who grabbed Ojanen, who handed the phone to Perry so he could talk to his dad directly.

"We were there to help support him and let him have time to process," Ojanen said.

They let Perry determine how he would grieve, the coach said, and Perry decided he wanted to play Friday night.

Ojanen said Perry was determined to make sure he listened to his mom.

"It was awesome to see all the support he got," Ojanen said, calling him "a very strong young man."

"This is healing for him, being with his teammates," Mark, the father, said.

At 6-foot-4 and 287 pounds, Perry is a gentle blond bear of a boy. He talks about being tough - "gotta be strong," he said Saturday - but he's the whole package, not a robot.

Coach Ojanen said Perry was comfortable enough to share his emotions with his teammates. Included in those are three special friends: fellow seniors Kollin Bonneville, Reese Sheldon and Lance Konietzko. The boys have played basketball and football together since third grade.

"Perry was not afraid to share his emotions with us, which I think is a very healthy thing, especially for a young male to be able to do that," Ojanen said. "It meant a lot to him to have the support, but I also think to his teammates it meant a lot that he's able to be vulnerable with them." 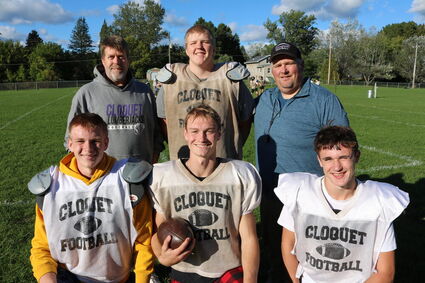 Perry said the support of family, teammates and friends has helped him grieve and keep his promise to his momma to keep up with football. Pictured clockwise, from back left are his dad Mark Goad, Perry, head football coach Jeff Ojanen, Kollin Bonneville, Reese Sheldon and Lance Konietzko. "If they were to write a book on how to handle it in a positive way, Perry would be the author," head coach Jeff Ojanen said. "He's a strong young man, he's embraced it and leaned on his family and friends' shoulders. It's really cool to see the support that he got from many people."

Perry is the youngest of five children in the Goad family. He described his mom as a super-caring person.

"She really didn't worry about herself; she always worried about other people. And I was her baby boy," he said, laughing. "She could be sassy, though. If you got on her bad side, it wasn't a good side to be on."

Some of her best qualities can be found in her son.

"He's a delight, down to earth, humble, always thinking about others, like his momma," Mark said.

Mark described how he and Holly liked to get to the games early and park on 22nd Street, just outside the fence near the 50-yard line.

That way Holly, who used a wheelchair, could stay warm and still see her offensive tackle son pancake the opposition. That's something he did more than once Friday.

One of the best moments of Friday's game? The seconds that came after Bonneville scored on a power rushing touchdown - aided of course, by some good O-line blocking.

"When Kollin ran in and scored, he started hugging everyone," Perry said. "When he saw me, he pointed at me, kissed his finger and pointed up to the sky."

There wasn't a dry eye in the house.