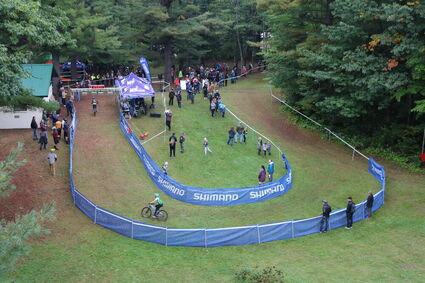 Competitors approach the finish of the Minnesota Cycling Association race conducted last weekend at Pine Valley in Cloquet. The race attracted more than 600 participants for two full days of racing.

Jonas Peterson celebrated his 13th birthday Saturday by showing up to his first mountain biking race several hours before the start of his race.

"I just wanted to hang out," said a smiling Peterson, who was surrounded by hordes of other school-age mountain bikers from across the state and as far away as North Dakota.

Peterson, racing for Cloquet-Esko-Carlton, was among more than 600 school-age racers at the Pine Valley recreation area in Cloquet last weekend. He competed in the 3.6-mile eighth-grade boys race.

CEC Coach Ryan Erspamer described Peterson as one of many on the team.

"We have a number of riders who, for them, this is the first and maybe only race they're going to do this year," Erspamer said. "They're very excited and, hopefully, it will lead to them doing additional racing in the future."

The CEC team emphasized development and to use the race as a test of each racer's skills.

"We encourage racing against themselves," the coach said.

The atmosphere was festive, with club tents popping up everywhere one looked, and the racing fast. Outside of a starting chute and an ending loop inside the park, riders mostly disappeared between the trees.

"I ride the course a lot," Peterson said. "It's fun, but climbing hills tires out your legs - especially when it's wet outside."

The race was the first of its size at Pine Valley, home to Nordic ski trails and a growing number of single-track bicycle trails. Never before had so many bike racers descended upon the park.

"This is a really fun course," said Gary Bruns, coach of the St. Croix Valley team. "It's not a cornfield course or a riverbottom course like we're used to seeing. It's a northern Minnesota course, for sure."

The Pine Valley course features roots, rocks, hills and numerous switchbacks, making for a wild ride. Built on a slope, it also drains well, meaning the weeklong rains preceding the race didn't impact the ability of the Minnesota Cycling Association to conduct the event.

"It went really well," Erspamer said. "The league is very happy with the results of how the course held up. As far as weather goes, a lot of trail systems can't handle it."

The club mountain biking season conducted by the statewide association features nine races in seven weeks. It's a sprint of a campaign that also saw racing in Rochester last weekend.

"We're just trying to get kids on bikes," executive director Josh Kleve said. "A lot of the kids out here never found a home playing stick-and-ball sports, so they landed here."

Others, Kleve added, are three-sport athletes who like the cross-training that a sport such as mountain biking offers.

The impact of the massive race on the accompanying Nordic trails was a concern heading into the event. The local ski club worried that so much racing could create ruts and soften the course to a degree it might affect snow build-up.

But the city of Cloquet wanted to try the event, because it's applying for regional designation status for Pine Valley through the Greater Minnesota Regional Parks and Trails Commission. Such a designation could open up access to new funding.

A survey of the trail network revealed the park held up well.

"Our staff did a walk-through of the course with event organizers at the conclusion of the event," said Caleb Peterson, the city's public works director. "Considering the rain over the weekend, the trails fared well."

Peterson noted the city identified approximately 100 feet of damaged trail over the roughly 4-mile course. Repairs were made throughout the week.

"It's already been fixed," said Brendon Menze, president of the Cloquet Singletrackers, an all-ages mountain biking club. "There was a little bit of rutting on the ski trail. There was no damage whatsoever on the mountain bike trails."

Now in its 11th year, the statewide cycling association looks like it can add Pine Valley as an annual consideration when it comes to lining up venues. 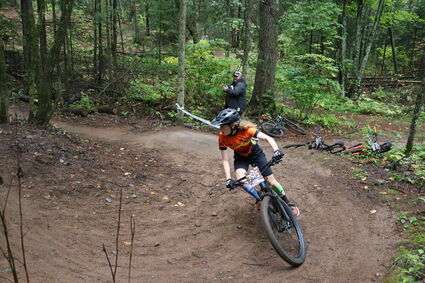 Crosby-Ironton's Avery Lonergan pedals her way through one of the switchbacks on the Pine Valley single-track race course Saturday, Sept. 24. Lonergan won the seventh-grade girls race.

"It's a great venue," Kleve said, liking the mixture of climbs to go with technical aspects, including handcrafted wooden jumps.

"They really loved the venue," said Erspamer, the local coach. "The course had a really good feel to it and they said they would love to come back."

The Cloquet-Esko-Carlton club is in its sixth year. When it started, there were more coaches than riders, Erspamer said. Now, there are more than 60 cyclists, as the club has opened up to Proctor and Hermantown riders, too.

Kleve noted the state association is adding 600 young riders a year, and features more than 3,000 registered competitors across the state.

"This is my first race, my first year doing mountain biking," Peterson said, promising it won't be his last.