Cardinals grind for win over Panthers 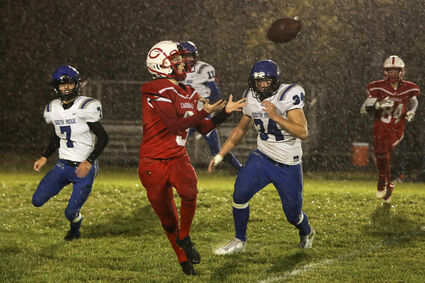 After seeing his team pushed around on both sides of the ball on a rainy Friday night, Cromwell-Wright Area football coach Jeff Gronner was more than happy to take the 15-0 win over the South Ridge Panthers.

"We physically got pushed around, but they had more mistakes and that's how things swung our way," Gronner said. "We won the turnover battle and that was enough to get the win in the game."

After a scoreless first quarter, the Cardinals were able to gain the upper hand on a Brady Dahl 1-yard touchdown run. After the two-point conversion pass from Phoenix Anderson to Dylan Nyberg, Cromwell-Wright Area led 8-0.

"I thought we played well, but turnovers and untimely penalties proved to be a little too much for us," said South Ridge head coach Brent Johnson. "We fumbled on our third drive, we had a muffed punt and we just couldn't keep things going."

While the Panthers were able to move the ball up and down the field, the Cards were able to hold to the old "bend, but don't break" mentality.

Austin Bergum had an impressive game on the ground for the Panthers with 20 carries for 118 yards as the Panthers piled up 185 rushing yards in the game.

The score stayed 8-0 until a little under four minutes remained in the game. That's when a major turning point occurred. The Panthers punter, facing a fourth down and 12 situation, took off and tried to gain the first down. Instead he came up a yard shy - giving the Cards a short field to work with.

"Our punter saw something and tried to make a play," Johnson said. "We had run the same thing effectively early in the game, but Cromwell was ready for it. Our guys tried and just came up short, and that happens."

Cromwell took advantage of the short field and eventually Nyberg was able to slip into the end zone from 8 yards out. Roma Jacques tacked on the extra-point kick for a 15-0 win.

Both coaches came out of the game with positive thoughts on where their teams are headed as the season progresses. 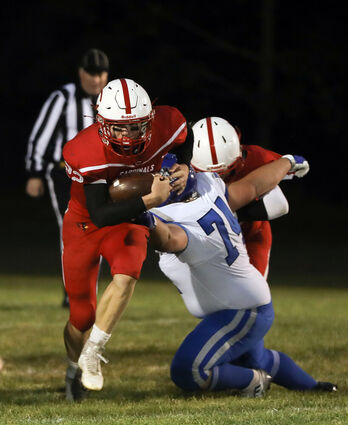 "We still have a shot when playoffs come," said Johnson of the Panthers. "We need to clean some things up and build momentum towards the playoffs, but I like our team and we will just keep working and getting better."

"Physically we were a bit inferior, but that has been the case all season," Gronner said. "What I like is that we are continuing to make key plays when we need to and we made [fewer] mistakes, and that's what helped us get a big win."

On the defensive side of the ball, the Cardinals got a huge night from Dahl, who had 18 tackles. He's been averaging 15 tackles per game.

"I like where we're at," said Gronner. "As young a team as we have, we put ourselves in a position to get a win and a home playoff spot."