In battle of top teams, Esko gets the 'W' 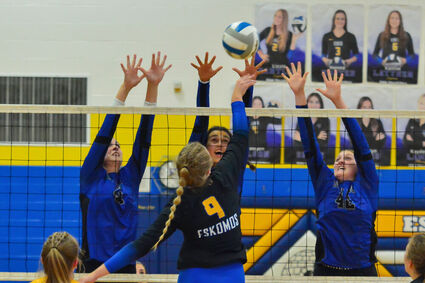 Esko's Kyra Johnson works to get a hit past a wall of South Ridge defenders, including Lily Josephson (41), Kaitaia Klemetsen (24), and Lauren Olson (42) as the Eskomos and the Panthers met Thursday night in Esko.

Two of the area's better volleyball teams hooked up last week when the South Ridge Panthers traveled to Esko to take on the Eskomos. While Esko pulled away to a 3-1 win, the fans of both teams were treated to an exciting volleyball exhibition.

"It was nice to be tested," said Esko coach Pete Stasiuk. "They run a good program over there and they made us work to get the win."

Esko rode the strong left arm of Gabby Martenson, who finished with 23 kills, and Kyra Johnson, who added 22 kills to nab the victory over the feisty Panthers.

"We knew they had a good setter and some real good hitters," said Panthers coach Brad Olesiak. "We just didn't have enough answers for their power hitters."

After falling in Game 1, the Panthers picked things up and tied the match after the second-game win.

"In that second game we got rolling and off to a good start," Olesiak said. "We had a six- or seven-point lead in the third game, but they were able to change the momentum and get the win. They are a good team and made key plays at critical times."

The Panthers were led by Svea Snickers with 14 kills and Kaitaia Klemetson with 12 kills. Adella Olesiak led the Panthers defense with 34 digs while Snickers added 13. Rylee Young finished with 31 set assists.

"After that second game, our girls knew they were in a fight," said Stasiuk.

"Once we got into Game 3 and into Game 4, the girls relaxed and they took care of play on our side of the court.

We haven't had many tough games like that all year, so to get pushed and then being able to push through to get the win was big for our team."

Kaitlin Lattner ran the Esko offense to precision with 45 set assists and Lizzie Hartlieb provided back row help by coming up with 25 digs. 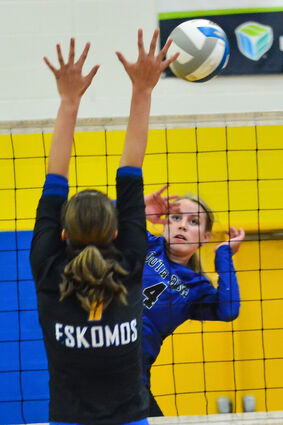 Panthers player Svea Snickers looks to get a hit past Esko's Emerson Harker during Thursday's game.

"I thought our girls played well and we went into a tough environment to play," said Olesiak of playing in Esko. "They have one of the best fan sections and we love going there to play. We are getting better and the more we play matches like that the better we'll get at learning how to close out matches."

"Playing good teams and getting tested are what makes your team better," said Stasiuk. "We'll get a good test this week when we play Cloquet and we look forward to that as well."