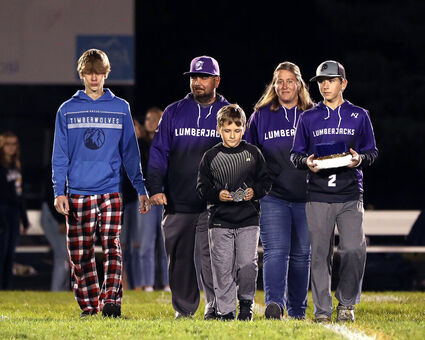 Noah and Jenny Feehan, along with their sons, from left, Jack, age 15, Logan, 9, and Peyton, 12, deliver the crowns for Cloquet's homecoming coronation Friday night during halftime at the football game on Bromberg Field.

The 2022 Cloquet homecoming celebration was a bittersweet moment for the Feehan family, which took center stage as they carried the king and queen's crowns across the football field.

Having Noah Feehan, a 2002 CHS grad, honored as the grand marshal for the evening was wonderful. The reason behind the recognition - the fact that the veteran has been diagnosed with brain cancer likely caused by his military service - is the tough part. But Friday was a really good day.

"It was so fun and the kids had a blast," said Noah's wife, Jenny. "I knew there were a ton of people because we were sitting shoulder to shoulder, but you don't realize how many until you walk out and see the stands in front of you. Wow."

Doctors discovered Noah Feehan had a brain tumor just before Christmas 2020; he had his first surgery on Jan. 4, 2021. A couple weeks later, the family of five got the news that he had a form of cancer called glioblastoma.

The Mayo Clinic, where Feehan is being treated, describes glioblastoma as an aggressive cancer that can occur in the brain or spinal cord. It can be difficult to treat and a cure is often not possible.

Feehan is doing relatively well. He still works in Duluth at the 148th Fighter Wing at the Minnesota Air National Guard.

He and Jenny enjoy watching their kids' sporting events and hanging out at home, and they all found time to take a family vacation this summer before another surgery in July.

Jenny said they have adopted a philosophy of living life to the fullest in the 22 months since his diagnosis.

"We are living for the moment, taking each day as it comes," she said.

This is not the first time Feehan's story has been told. Public Health Watch and Military.com did a joint investigation last year. From that came an in-depth story which started with Feehan and highlighted the difficulty so many soldiers faced in getting the Veterans Administration to grant benefits to service members diagnosed with brain cancer during or after service. (Editor's note: Read the full Public Health Watch story at https://publichealthwatch.org/2022/01/12/veterans-brain-cancer-glioblastoma-benefits-disability-burn-pits/ .)

The investigative reporting said service members blamed their cancers on everything from "working around electronics and jet fuel, in places contaminated by depleted uranium and pollutants, and living alongside belching pits full of burning trash." But there were few proven links between the toxic exposures and specific cancers.

Feehan deployed to both Iraq and Afghanistan.

"It was disgusting what they threw in there," he said in the report. "Tires, jet fuel, body parts, plastics."

President Joe Biden's son, Beau Biden, died of glioblastoma in 2015. He had deployed to Iraq in 2008 and also worked as a civilian near a burn pit in Kosovo.

The investigative story took a deep dive into the rates of glioblastoma in civilian population versus military, where the rate is 26 percent higher among post 9/11 veterans who were deployed. Yet 42 percent of those veterans were denied access to health care and disability compensation by the VA, their reporting found.

But not anymore. That story may have helped convince members of Congress to pass the Promise to Address Comprehensive Toxics (PACT) Act, which was signed into law by President Biden in August after it passed both the House and Senate.

"We have many obligations but only one truly sacred obligation: to equip those we send into harm's way and to care for them and their families when they come home ... This is the most significant law our nation has ever passed to help millions of veterans who were exposed to toxic substances during their military services," President Biden said on Aug. 10, before he signed the PACT Act into law.

Costs of the PACT Act are estimated at roughly $680 billion over 10 years.

The new law recognizes toxic exposure as a "cost of war" by addressing the full range of issues impacting toxic-exposed veterans. In addition to expanding the number of veterans who qualify for benefits to include more recent military actions, veterans will now be eligible for benefits for 23 burn pit or toxic-exposure-related conditions, including glioblastoma.

Jenny Feehan said they were thrilled when it passed.

"Veterans deserve the benefits and support because of all the sacrifices they make," she told the Pine Knot.

Cloquet High School counselor Nicole Lackas suggested that Feehan be part of this year's homecoming, Jenny said. Lackas was Peyton Feehan's fifth-grade teacher the year his dad was diagnosed, and a big help.

"She holds a special place in our hearts," said an emotional Jenny.

Lackas clearly remembered when her student's father was diagnosed, as it was two weeks after he chaperoned a weeklong trip. She said it was apparent that Feehan knew almost every student in the class from previous coaching and volunteer experiences.

"After Noah's diagnosis, my students really bonded and supported Peyton, and I've since been touched by Noah's fight, resiliency, and the fact that every second since that diagnosis, he's lived life to the fullest, demonstrating deep love and appreciation for those all around him every step of the way," she said.

Lackas said she recommended raising money in Feehan's name for glioblastoma when the new homecoming committee chair, Nicole Sandman, said she wanted to create a deeper sense of community and unity by supporting a cause during homecoming week.

"There's a lot of beauty in seeing how strong Noah has been during his fight, and the idea of our fantastic students being 'Feehan Strong' throughout homecoming was a beautiful way to honor him," Lackas said.

Being part of homecoming was special for them too, Jenny said, sharing a heartwarming story from the powderpuff football game last Wednesday. When they arrived at the field, several students were out in front of the football field holding signs referencing Feehan and asking people to donate to glioblastoma research.

Jenny asked them if they'd like to meet Feehan.

The family ran into the same group of girls at Friday's homecoming game and got another enthusiastic greeting, Jenny said.

"It's nice to get the students involved," she said. "Otherwise, not many kids would know about a disease like this."

Asked if there is anything people can do to help, Jenny suggested donating to cancer research at Mayo or similar organizations. There are many different foundations as well, including a glioblastoma foundation.

"It doesn't have to be for glioblastoma, any cancer, whatever people want to do," she said.