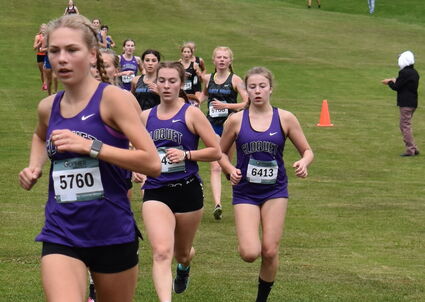 Members of the Cloquet girls team race in front of South Ridge early in the Lester Park Invitational on Saturday. Pictured from left are Cloquet's Elise Sertich, Charlotte Ripp and Adrianna Nelson with Panthers runners hot on their heels.

The Cloquet and South Ridge boys and girls cross country teams participated in the Lester Park Invitational on Saturday, Oct. 1 in Duluth. Both teams saw some success and both teams were able to learn more about what they will need to do this month to get ready for the section race at the end of the month.

On the boys side, the Lumberjacks got a stellar first-place performance from senior Miles Fischer, who won the 5-kilometer race with a time of 16 minutes, 18.9 seconds. Fischer's time was 40 seconds faster than that of runner- up Mark Kaczmarczyk of Duluth East.

"Miles had a good race on Saturday," said Cloquet cross country coach Chandra Allen. "He is happy with it and where he wants to be."

Meanwhile, South Ridge sophomore Alex Burkhardt finished a strong fifth in a field which included numerous large schools from around the state.

"Alex has been solid all year," said Jeremy Polson, Panthers head coach. "I am not shocked by how well he has been running."

Cloquet junior Calvin Snesrud was the 'Jacks second-best runner on Saturday, finishing in 19th place, while Tyler Morse was the second runner for South Ridge, finishing in 32nd place.

"Calvin Snesrud is improving nicely each week and Mike Kruse is another one that has made a big improvement this season," Allen said. "Ian Berube, Gage Allen, Ben Sanders, and Ethan Lavan have also been improving their times each week and I hope that they all continue to drop times."

"Overall, I am really happy with the boys team; they are coming together nicely," Coach Allen said. "They will continue to improve as we have just started speed training and kept our mileage consistent."

Scoring for South Ridge were Burkhardt, Morse, Lincoln Antikainen, Luke Price and Logan Hunstad. Darrin Larson was next in contention for points.

"We have a lot of younger runners," said Polson. "Right now it is about putting in the miles, keeping our fitness and staying healthy."

The top local runner was South Ridge junior Evelyn Brodeen, who finished in sixth place. The Panthers also got another top-20 performance from sophomore Addison Burkhardt, who was 19th overall after winning the Section 7A meet last year as a freshman. Zoey Burkhardt added another top performance as the seventh- grader took 23rd place, followed by Tatum Barto in 24th place. Scarlett Vanderscheuren who rounded out the scoring for South Ridge with a 28th-place finish. Brook Smith, Rory Bundy and Tegan Fordahl also finished and ran strong races for the Panthers.

"We've had 10 meets this season and this was a good finish against good competition for our girls team," Polson said. "It was good to get an idea of where we are at as a team." 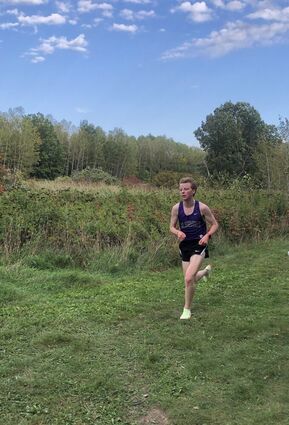 Cloquet was led by Bri LaCore with a 22nd-place finish. LaCore was closely followed by Elise Cawcutt in 25th and Charlotte Ripp in 26th. Keanna Simmula and Alexa Shepherd rounded out Cloquet scoring by placing 29th and 30th, respectively. Adrianna Nelson and Victoria Nelson had strong meets by finishing in 37th and 41st places, respectively.

"Bri LaCore has been leading the girls team this year," Allen said. "We saw nice improvement from our girls at Hibbing and the Lester Park meet. Charlotte Ripp is back and ran well in her first two meets."

With the section meets looming at the end of the month, it was Allen who summed up best what most coaches are probably thinking this time of year.

"My expectation for both teams is that they will stay focused, practice hard, and keep encouraging one another to do their best in practice and at races," Allen said. "I would like to see them all run personal bests at the section meet."