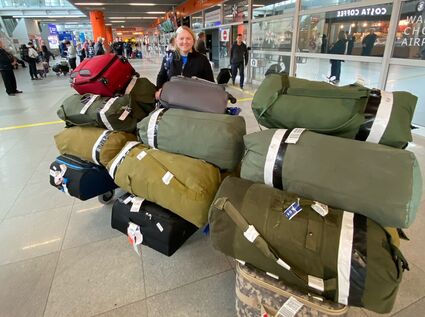 Carlton resident Galyna Tuttle flew with 18 bags of mostly medical supplies to Ukraine in May. She brought supplies to hospitals and people of all ages in central Ukraine. She's headed back with more supplies next week.

Carlton resident Galyna Tuttle is headed to Ukraine next week for the second time this year.

Born and raised in the now war-torn country, Tuttle is bringing more medical supplies, warm clothing and sleeping bags, and will purchase food to bring to rural villages once she's there.

However, this time she has plans for her return trip to Minnesota as well. She's bringing two young women and a toddler back with her. They will join another refugee, Gloriiya, who arrived three weeks ago from Ukraine.

"She wants to build her life here in the U.S.," Tuttle said.

Tuttle moved to the United States with her husband, Andrew Tuttle, 16 years ago. She works at Common Ground Coffee Bar & Deli in Cloquet, and the couple also started a nonprofit in 2018 called Eleventh Hour Ministries, to help support Ukrainian widows and orphans, especially orphans who age out of the state-run system and often end up on the streets.

After Russia invaded Ukraine in February, the couple initially worked to help as many of the folks they were already helping get out of the country. They also sent money for food, which was purchased in Romania and brought into Ukraine for refugees, a risk for the volunteers who carry out the operations on the ground.

In May, Galyna (pronounced "ha-LAY-na") and Andrew's nephew, JT Tuttle, made a 15-day trip to Ukraine with 18 bags of mostly medical supplies, plus some food and clothing. Once they were in Ukraine, they bought large bags of rice, flour and sugar to give away as well. It took three days to get there and almost four days to get back to Minnesota.

She had visited unfettered in November, before the invasion. But in May, she had to go through Poland to get there. The Polish officials were incredibly helpful, she said, and got them over the border quickly, and at night, since they had vital supplies.

She found her homeland dramatically changed.

"As soon as we crossed the border, you start hearing it's a war, then there's the presence of the military and checkpoints," she said. "And there are landmines, so you cannot drive even a little bit off the road or you can blow up."

She shared photos of signs warning drivers of the danger and others of buildings hit by missiles and/or pocked with bullet holes.

When they arrived at the hospitals and treatment centers for soldiers in central Ukraine, Tuttle said the doctors - including her niece - were incredibly excited and grateful to receive even the most basic medical supplies.

"It was like Christmas for the doctors," she said. "They all tore into the boxes to see what there was and paid no attention to me, telling each other to call other doctors who had been waiting. They were digging through the boxes, grabbing and running away. In the end, they did thank us a lot."

A lot of the medicines were taken to the frontlines by others, as well as items such as tourniquets and items vital to saving lives right away.

Her only regret is she didn't keep any medical supplies for her family and the village where they have been staying.

"I spent only one night with my mom," she said. "It was a bittersweet visit. I did not tell her that I was coming so it was a surprise for her. She said, 'What are you doing here? Don't you know it's war here?' and she cried."

And now Galyna Tuttle is preparing to go again, departing on Oct. 20.

This time she will go alone.

"Because it's becoming more dangerous with lots more attacks on civilian infrastructure, and I have to go through several cities that have been hit, plus the threat of nuclear attack, so I'm afraid to risk anyone else's life," she said.

If all goes well, Galyna and her three guests should be back in Minnesota by Nov. 10.

Many medical supplies are needed, but these are the most vital: 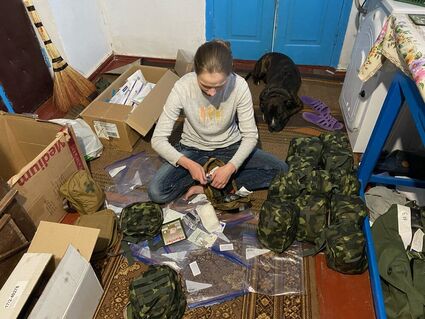