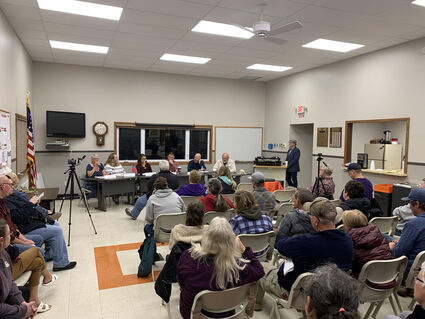 An amicable gathering last week brought together most of the Wrenshall school board candidates in a public forum for the first time.

As it concluded, the six candidates in attendance expressed pride in the school, and appreciation for one another. It stood in contrast to the tumult which has mired the board throughout the past year.

But in subtler ways it also further illuminated the chasm between four relative newcomers and incumbents Deb Washenesky and Jack Eudy, along with board appointee Cindy Bourn, who was not in attendance due to a family visit to Canada.

"The incumbents have had four years to try," Mary Carlson said. "If you want to see change you need to vote for some new names, and you've got four willing and able people."

"It's time to move on and work together and communicate with a shared vision," Reinsch said. "If we can't do that then the future of Wrenshall is in jeopardy."

The seven candidates, including current appointee Ben Johnson, are vying for three seats on the board in the Nov. 8 election.

"Honestly, we do need change," Ankrum added. "I have a hard time believing the current school board right now is going to find a path back to working together and communicating with each other and listening to each other."

Washenesky and Eudy balked at the notion, saying responsibility for disharmony belonged elsewhere.

"There's a lot of tension between teachers, administration and the board, and it hasn't all been created by the board," Washenesky said.

"I do believe it's getting time for a change in administration in our school," Eudy added, referring to superintendent Kim Belcastro, who was not there.

Community members asked the questions Thursday of candidates, who each had 1 minute, 30 seconds to respond to an inquiry. Several teachers were among the roughly 40 attendees at the Wrenshall fire hall and city office. Topics included student retention, the estimated $300,000 budget shortfall, consolidation with Carlton, disharmony with the teachers' union, and a community rumor mill that candidates blamed for making a challenging time even harder.

"There is nothing more toxic than incorrect information spreading throughout the community," Johnson said, urging parents with questions to reach out to teachers before anybody else.

Washenesky, Eudy and Bourn had previously held their own forum, declining to participate in one sponsored by the school's unionized teachers. They authored a mailer that was sent throughout the district. It referred to teachers as "dishonest and unprofessional." But at the forum, Eudy said he didn't understand the conflict with teachers. He explained he helped previous contract negotiations reach mediation, because he knew the school's unhealthy budget situation and wanted to leave as much money on the table as possible.

"You get respect when you show respect," Washenesky added of teachers.

Reinsch cautioned against pressing too hard against the educators in the school of roughly 350 students.

"If we think teachers are a dime a dozen, we're very much wrong," she said. "If we are going to be at odds with them, we are going to find ourselves very quickly out of teachers and with a reputation for being an unfriendly teacher school."

Johnson called for the board to "refocus," highlighting positives such as the school's newly renovated career and technical education center, which teaches building trades, and the College in the Schools program that allows students to bank college credits while still in high school.

As far as ideas, Carlson said she wanted to conduct meetings to lure back families inside the district who drive their students to open enrollment elsewhere. Johnson said he wanted better meeting formats that used sound systems - like the one used at the forum - to elicit better communication between the board and the other meeting participants and guests.

"A lot of times people sitting in the back of the media center can't hear anything," Johnson said.

The six candidates in attendance agreed that consolidation with Carlton schools was the best move for students and the financial health of both districts.

Eudy described consolidation as a process that had come close after the most recent negotiations, only to fall apart near the finish line. He cited an unnamed Carlton official, and said, "If I could have grabbed him by the tongue I would have. ... We tried hard."

"Someday that will come together," Washenesky said. "The more programs we get together, the more likely we are going to get the districts together, and that would benefit every student and district member."

There are no further candidate forums scheduled in the race for Wrenshall school board. The board's committee of the whole met Wednesday, Oct. 12, after this edition of the Pine Knot went to press. The board meets again at 6 p.m. Monday, Oct. 17 at the school.