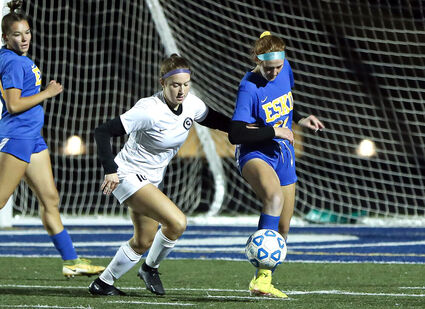 Cloquet's Kiley Issendorf and Esko's Liberty Clifford play the ball during the first half of Thursday night's soccer match at Esko Schools Stadium.

Cloquet and Esko met early in the girls soccer season with the Lumberjacks coming out on top 5-2. Since that time, the Eskomos reeled off 11 straight wins while Cloquet went 9-2. On Thursday, Oct. 6, the two teams met again in a game that ended in a scoreless tie, 0-0, even with overtime.

"We scored early in the first game we played against Esko, but on Thursday we didn't and they are a very athletic team," said Cloquet coach Dustin Randall. "They passed the ball well and both teams had chances to score. It was just a good high school soccer game."

Since that loss back in August, the Eskomos have been impressive. The team used that loss to jumpstart an impressive run of wins.

"We've worked on a lot of things since that game," said Esko coach Sharon Lahti. "We worked on the flexibility of our formations and systems of play. The girls needed to know that when we see different formations it is OK to change our formation and make adjustments and overlap and even move to different positions on the field when the game dictates."

Those tactics kept the game even throughout. With both teams fighting for high seeding in their respective sectional playoffs, it was important to continue to see improvement.

"Right now, we are focusing on competing and not on winning," Randall said. "We want the focus to be on showing up and fighting each night and every minute of every game. The wins will come if we do those things."

Lahti echoed those sentiments for her team as well.

"With the playoffs coming up we want to just go out and play how we play," said Lahti.

Esko wins in 7A quarterfinal

Esko nabbed the No. 1 seed in Section 7A with a record of 12-2-1. On Monday night, the Eskomos opened its sectional playoff by knocking off No. 8 seeded Proctor 5-2.

Kaitlyn McConnell led the Eskomos in the scoring column by notching two goals against Proctor on Monday.

“We came out flat, but still got the win,” Lahti said. “Now, it’s on to the next game on Wednesday against Two Harbors.”

Two Harbors was the No. 5 seed and beat No. 4 seed Lakes International Language Academy to advance to the semifinals. 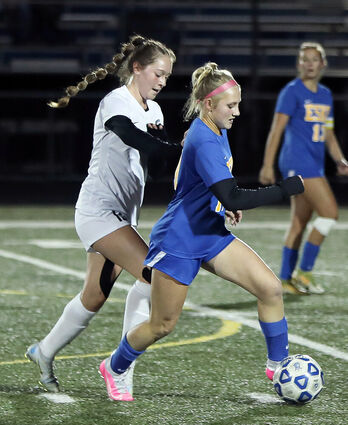 In Section 7AA, the Cloquet girls finished the regular season with a record of 12-3-1 and garnered the No. 2 seed. Grand Rapids received the top seed, and the No. 3 seed went to Duluth Denfeld. Hermantown was seeded No. 4, North Branch is No. 5, Hibbing-Chisholm is the sixth and Mesabi East is seventh.

Cloquet opened play on Tuesday night at home against Mesabi East with a rout, soundly defeating the visitors 13-1 and advancing to a semifinal game against Denfeld Thursday at 4:30 p.m..

The Lumberjacks boys team was seeded No. 1 in Section 7AA. They were scheduled to play Grand Rapids at 7 p.m. Thursday at home after a first-round bye.