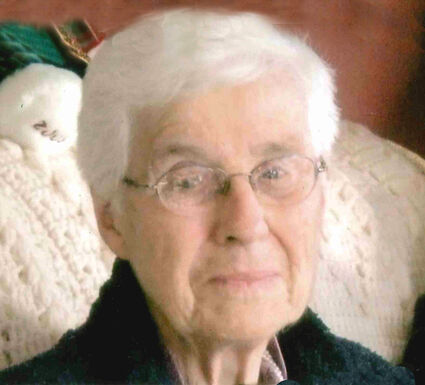 Dorcas H. Johnson, 92 of Carlton, Minnesota passed away Wednesday, October 19, 2022, at Barnes Care in Esko. She was born August 7, 1930, in Maple Plain, Minnesota, the daughter of Henry and Harriet (Lamson) Kaetterhenry. Her family moved to the Fleming area of Aitkin, Minnesota where she attended the country school of Smith school and later attended school in Aitkin graduating the Class of 1948. Dorcas married Eddie Johnson on June 11, 1949, at the Johnson home. They moved to Duluth where Eddie worked at US Steel and Dorcas worked at the Chris Jensen Home. She quit working when they bought the farm south of Carlton, Minnesota. They attended St. John’s Lutheran Church in Wrenshall until its closing. Dorcas was a member of St. Paul’s Lutheran Church in Cloquet until her passing.

Dorcas was preceded in death by her husband, Eddie; her sisters, Abbie Burr and Shirley Hunter; and brother, Mark Kaetterhenry. She is survived by her son, Burton Johnson of Carlton; sisters, Hulda Lind and Rachel Pickett of the Aitkin area; brother, Kenneth Kaetterhenry of Washington; and numerous nieces and nephews.

A memorial service will be held on Wednesday, October 26, 2022, at 11 a.m. at St. Paul’s Lutheran Church in Cloquet. Visitation will be held one hour prior to the service beginning at 10 a.m. and continuing until 11 a.m. with a luncheon following the ceremonies. Inurnment will be held at a later date at Hillside Cemetery in Carlton. Nelson Funeral Care has been entrusted with arrangements. To sign an online registry, visit http://www.nelsonfuneralcare.net.