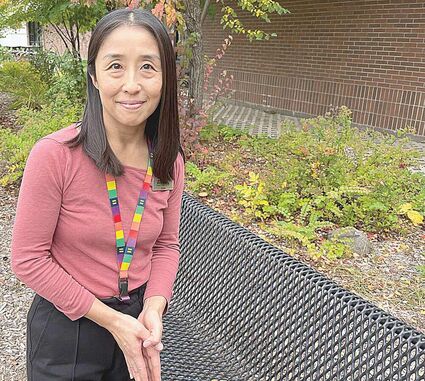 Keiko Satomi moved from the position of children's librarian at the Cloquet library to adult services librarian in August. Born in Japan, she brings a wide range of interests and experiences to the library.

A lifetime of journeys has brought Keiko Satomi to her newest position as adult services librarian for the Cloquet Public Library.

A beloved children's librarian here in recent years, Satomi got the adult services job in August. But there was a time when the native of Japan thought Cloquet residents might not accept her as a librarian. Fortunately, she was wrong.

Satomi grew up on the core island of Japan in an area called the Shiga Prefecture, a populous state in the middle of the island nation, with her dad, an engineer, and her mom, a stay-at-home caregiver. She described her mother as a Tiger Mom who pushed her to high levels of achievement. Satomi started piano lessons at age 3, and could not go outside to play until her daily lessons and homework were completed. Other rules for her and her brother included only two hours of television per week - a Japanese comedy and the American classic "Little House on the Prairie." She can still hum the "Little House" theme song. Her escape was reading, and she spent much of her spare time enjoying it.

Satomi excelled in school, and in college majored in education with a minor in mineralogy. After teaching elementary students for four years, she took an unusual step. In her mid-20s and always having been intrigued by the American indigenous culture, she enrolled as a student at the Institute of American Indian Arts in Santa Fe, New Mexico, the homeland of the Pueblo nations.

She met her now ex-husband there. They moved to Cloquet - which was home for him - in 2006. Upon moving here, Satomi worked at the Head Start program on the Fond du Lac Reservation.

For almost a year, Satomi did not hear the Japanese language spoken. She then made friends with a few Japanese people in Duluth, and that helped with her loneliness and missing home. Seeing another Asian person at the Cloquet Walmart, she realized she was not alone and could thrive.

The long Cloquet winters were a shock to her system as well. She later discovered cross country skiing and found the winters to be more tolerable once she found ways to enjoy the weather. She even camped in the winter. "I hated it the first time, but the second time was great."

The 2006 move may not have been in her crystal ball, but Cloquet has become home for Keiko and her two sons, Kaio, who was 4 years old then, and Taiju, who was only 2 months old. The boys are now 16 and 20.

After four years, in December 2010, they moved to Des Moines, Iowa, where Satomi worked at Drake University in its Head Start program. In her two classrooms of 14 students, seven languages were spoken. It was a diversity challenge she craved and, likely, would not have experienced in Japan.

After a couple years, the family moved back to Cloquet after her husband got another job here.

Libraries made the transitions easier for Satomi.

"I was a bookworm as a kid, and whenever we moved, the first place I visited was the library," she told the Pine Knot. "When we moved to Des Moines, I took kids to a library the first day. The library was my safe haven and my dream."

In 2013, Keiko was hired for a 13-hours-a-week library position by then Cloquet library director Mary Lukkarila. She experienced some computer and language challenges, but nothing she felt that she couldn't overcome.

Around the same time, Satomi started graduate school for library and information studies, with youth services as her endorsement.

"All my previous work was with children and families, so I thought that was a good fit," she said.

Next she applied for, and got, the children's library services position in 2018.

But still she was worried.

"I was very nervous to do storytime, because I have an accent and I still make mistakes in English because it's my second language," she said, explaining that she would practice and practice beforehand to avoid mistakes. "But it's been good. I'm impressed that people are open-minded."

She excelled. The programs she has developed, including the Kids Summer Reading program, have flourished. She loved everything about the job, Satomi said.

"There were so many little joys in that job," she said. "Plus I enjoyed collection development; diversifying the collection was one of my goals. And the programming too. I really hoped to bring more Native population to the library, which I struggled with."

Satomi said one of her most overarching goals has been to create a very inclusive space in this community where everyone feels welcome and represented. That's still a work in progress.

In May, Satomi successfully completed her master's degree in library and information studies from the University of Wisconsin in Madison's online program.

Applying for the adult services librarian job was another step in her journey, Satomi said.

"In my previous position, I couldn't get supervisory experience or be involved in major decision making in the institution," she explained. "For my future, I thought I probably need to move forward. I really miss working with the kids, but I wanted to expand my experiences."