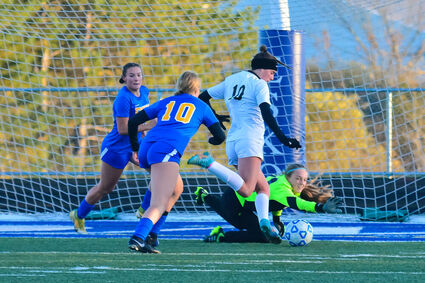 The Esko Eskomos take the 7A Section championship after defeating the Spectrum Sting Tuesday evening in Esko.

When Esko and Spectrum girls soccer met for the Section 7A championship Tuesday, the matchup pitted a speedy, defensive-minded Esko team against an offensive-minded juggernaut. In the end, the Eskomos prevailed, 2-1, at home, allowing them to advance to the state tournament for the first time since 2011.

"I am just so happy for the team," said first-year coach Sharon Lahti after the game. "This is such a tight-knit group, and truly that is why they play so well together."

Esko played into a strong headwind in the first half, but they carried the bulk of the play. But with 6 minutes remaining, the Sting were able to spring Madisen Fritel free for a mini break on Esko goalie Hannah Roemer. Fritel, widely regarded as one of the top forwards in the state, was stopped by Roemer on the first shot, and then Roemer made a play from her knees to stop a second shot, keeping the game scoreless.

"That was huge for us," Lahti said. "It kept things scoreless and it wasn't long after that when we got our first goal. Hannah had an amazing game for us, and we needed that tonight."

That goal came when Kaitlyn McConnell pounced on a ball in front of the net after a corner kick with 4:51 remaining in the first half.

"To respond to that pressure and score was big for us," Lahti said. "Kaitlyn made a nice play, and to top it off, it was on her 16th birthday."

As the second half began, the Eskomos held the 1-0 lead and had a strong north wind at their backs. They also had momentum and applied constant pressure on the Sting net. Unfortunately for the Eskomos, the Sting had other ideas. With 24:37 remaining in regulation, Fritel got free and worked behind the Esko defense to finally get the ball past Roemer. The score was tied at 1-1.

"Our defense really executed all night, but a player like that is going to get a chance," Lahti said. "We were practicing yesterday about the defensive basics. Pressure, cover, balance, who should press ... all those things we did well tonight and executed."

The goal by Fritel was the last time the Sting would get a shot on goal. From that moment through the rest of the game, the Eskomo defense corralled the Spectrum offense.

The Esko offense managed a goal on a spectacular play by Ava Korby with 15:30 remaining, to push the lead to 2-1.

"The goal that gave us back the lead was just the result of our girls continuing to push," said Lahti. "They didn't sit back, they kept putting on the pressure, and that was the result."

Even after Esko grabbed the lead, it continued to own the territorial play. The only concern was whether they would give up another chance to Fritel, and despite the Stings' best effort, they could not spring Fritel free.

As time wound down it became apparent that Esko had put a constrictor-type defense around a team that had scored 99 goals in just 18 games this season, and that it would take a minor miracle for them to score.

"We don't typically do man-marking, but we decided to do that for the second half," Lahti said. "That role got handed over to Avery Kuklinski because Fritel was actually dropping down into the middle, and so Avery was going to pick her up. She ended up all over the place, but Avery was able to get some of those inside passes and cut those off, and that made a difference in the second half."

After intercepting yet another pass just before midfield, the Eskomos managed one last long kick toward the Spectrum goal that rang off the crossbar of the football goal post as the clock slipped down to zero. Then the team stormed the field and the celebration began. 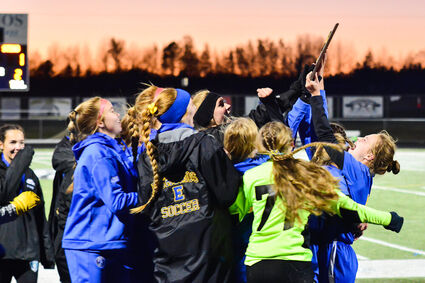 UPDATE: Ranked No. 5 in Class A, the Eskomos will play No. 4 St. Anthony Village High School in a state quarterfinal game at 5:30 p.m. Thursday, Oct. 27 at Kuhlman Stadium, Edina Community Center. If they win, the Eskomos would play next at US Bank Stadium at 5 p.m. Wednesday, Nov. 2. The Class A championship game is at 5 p.m. Friday, Nov. 4