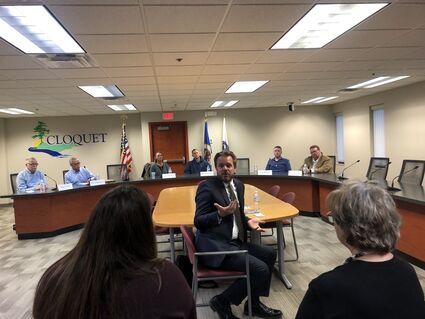 The Cloquet City Council chambers was a revolving door Tuesday, as candidates for six races answered questions in the Cloquet Area Chamber of Commerce candidate forum, an election year tradition.

All of the forums ran smoothly, with a quiet and polite Minnesota audience made up mostly of other candidates, their supporters and a handful of interested citizens. It was a far cry from most national or even statewide televised debates, with no rudeness or verbal fireworks, and zero rebuttals until the state legislative candidates took the stage.

Moderator Tony Sertich explained to the live audience and those watching online that neither Keller nor Erickson's name would be listed on the ballot, so voters will have to remember to write in their names and not vote for the listed candidate, Chris Swanson, because he moved outside of Ward 3.

When asked about the two Cloquet sales tax questions on the November ballot - which would provide funds for roughly $8 million worth of projects at Pine Valley park and the two adjacent hockey arenas - all six candidates expressed strong support. They were in agreement on the value of the projects, and liked the idea of paying for it with sales taxes that are partly paid by people who don't live here, versus funding with higher property taxes.

They also mostly agreed on riverside development, endorsing a focus on keeping it nature-centric, "for recreational purposes only," said Blesener, while advocating for more touristy development on the west side of Highway 33. Keller would like to see more kayak-friendly ports of entry, and a cafe or restaurant overlooking the riverfront.

Erickson, a firefighter, said he favors development but the city would have to "figure out traffic first, how to move people smoothly through there."

They were largely in agreement on broadband: basically that it's infrastructure everyone should have access to, paid for with mostly private but some public funding/grants.

A question about support for prevailing wage requirements or project labor agreements showed more of a divide. Generally, under the terms of a PLA, construction unions have bargaining rights to determine the wage rates and benefits of all employees working on a project. PLAs also typically require that employees hired for the project are referred through union hiring halls.

Maki said he supported both PLAs and prevailing wages.

Bjerkness said he's on record from years before as not being in support of PLAs.

"I think what we need as representatives of the taxpayer is the best value. The state and all government entities go by prevailing wage, which are set and driven by union wages," he said.

"I don't think I'd be sitting here today if it weren't for unions in this city," he said. "I will always look at the issues carefully ... but I am going to back up the unions 99.9 percent of the time."

All six candidates said they think Cloquet is a safe community, and agreed the city needs to support its police.

Blesener, a retired police officer, said he is hearing scary things, that officers are afraid if they take action they will go to prison.

"I think our police have done a remarkable job turning things around after a rough couple years," Carlson said, adding he thinks the CAFD fire and ambulance services are second to none. Erickson also pointed to a "new generation of policing."

Bjerkness said community policing is his top priority, while Maki said he's a strong proponent of giving the police the tools they need.

Keller supports the police department, but thinks neighbors need to be more aware of what's going on and talking with each other.

"That's also part of keeping the community safe," she said.

As for final thoughts, Blesener brought up the "dire" need for more housing for moderate-income and retired residents. Carlson said this council are some of the best people he's worked with, and he wants to keep that going. Both Keller and Erickson have a desire to serve. 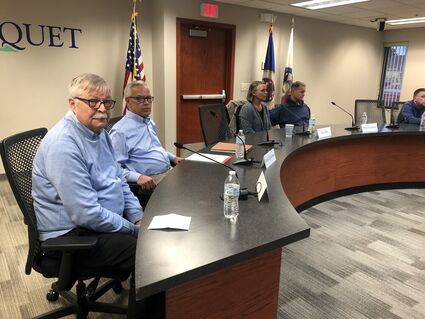 Bjerkness, who served on the council for 17 years, said his experience politically and professionally as an architect make him a great candidate, and that he's seen "a void in leadership" in the mayor's office.

"I'm the candidate that can fill that void," Bjerkness said.

Maki pointed to promises he made when he ran "to restore the trust in local government that was gone after 2017-2018," touting his 12 years in public office, including eight years as councilor. "We were in the news for all the wrong reasons. Now, after a lot of hard work, we're in a good place. I want to move us forward and keep us on the right track. The future is bright."

Look for more coverage of the candidate forums in next week's Pine Knot News. Watch the forums on the city's website here: https://cloquetmn.new.swagit.com/videos/187318. Mediacom TV subscribers can watch the recordings on CAT-7.