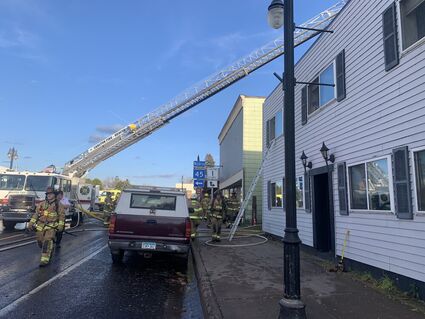 A fire Friday afternoon left a downtown Carlton apartment building left a number of families without a home.

Ave. The caller reported an electrical fire and that smoke was coming from the second story of the multi-family apartment complex.

Upon arrival, law enforcement noticed smoke coming from the apartment and primarily from an entry door of

the complex. Multiple families were evacuated and neighboring structures were notified. All the residents of

the complex were accounted for and no injuries were reported.

The American Red Cross will be assisting those families displaced from the fire. Extent of damage is still being assessed, but up to seven units have been affected by either smoke and/or water.

Although not suspicious the State Fire Marshall was contacted to assist in determining the cause of the fire. The Carlton County Sheriff's Office, Carlton Fire Department and Ambulance Service, Wrenshall Fire