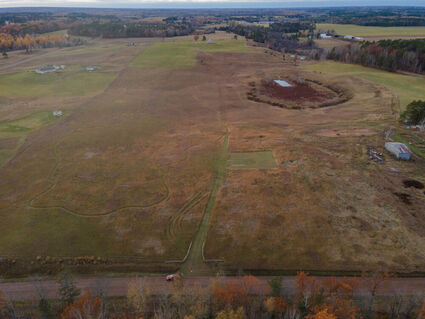 The proposed "green" cemetery located on Pioneer Road in Blackhoof Township, Loving Earth Memorial Gardens, would bury the deceased without vaults or tombstones. The site features fields and is surrounded by residential homes and properties.

Outside Barnum, where horses populate handsome stables and open fields, and scores of round bales tell of a robust hay harvest, the sale of 20 acres of land has sent Blackhoof Township residents into prolonged shock and disbelief.

"We've been caught off guard," said Eric Braun on Wednesday, Oct. 19, during the latest in a series of township meetings on the topic.

The property is located east of the firehall along Pioneer Road. It features a new wooden fence entry inviting visitors to walk in from the dirt road. The highpoint of the land overlooks a pocket valley, featuring numerous homes that surround the site of the newest cemetery in Carlton County.

But unlike the scores of traditional cemeteries in the township and county, Loving Earth Memorial Gardens will be a "green" cemetery, one in which the deceased, eventually by the thousands, will be buried in pine boxes or cloth shrouds. No headstones are planned for the site. Rather, the deceased will be buried under fieldstones and with GPS chips so that loved ones can locate and visit them.

The Pine Knot spoke this week to the owners of the cemetery, Ed Bixby, of Marshallville, New Jersey, and Matt Connell, of Crystal, Minnesota. Partners in a mentor-mentee way, with Bixby already operating a dozen green cemeteries around the country, they closed on the $80,000 land sale in August. They did their homework, they said.

"It was such a beautiful place," Connell said. "I've meditated and prayed on it, and came to the realization that it was ideal. There were many other properties - dozens of properties."

In response to reaction from residents, this month they offered the land back to residents for $350,000. Residents had first offered the original price, and a 10-day deadline for the counteroffer was set to expire before this edition of the Pine Knot reached the press. Bixby said he didn't buy the land to sell it, and he didn't expect residents to meet the price.

"This is no longer a hayfield; I'm going to value it as cemetery property," Bixby said. "My good fortune is not going to be misfortune. We found the perfect property."

Residents have been to the county and township repeatedly, pleading for technicalities and what they believe is good reason to halt progress on the cemetery. They've also secured an attorney, a fact that has sent county officials into quiet mode.

"What I can say is I know neighbors have concerns, and we've been looking into that," county attorney Lauri Ketola said. "We want to make sure the county is responding in a legal matter."

County commissioner Mark Thell has been an active listener, but said the county board is loath to use taxpayer money to fund a futile legal challenge.

"My mission is to find a win-win here," Thell told the newspaper. "The citizens I represent feel they didn't get the right answers."

"This is about the seventh peacekeeping meeting we've had," township supervisor Clayton Kauppla said to the audience. "We have no legal grounds to help you at all."

Up close, the residents appeared largely respectful. They kept their voices to spirited conversational levels, and mostly avoided stereotypes, though some residents wondered about "north Minneapolis" residents being buried in their backyards. Others insinuated the cemetery would be used primarily by members of the Islamic faith, which is among the religions that practices natural burials without embalming or the use of coffins and vaults.

"We do not discriminate," Connell said.

Bixby dismissed the presumption, too, saying he works with members of all faiths.

"Is the main source of my business Muslims? Absolutely not," Bixby said. "I don't even know if it's 1% of my customer base. My customer base is everyday, average people who want something simple - they're cremation converts. There is not one race, sexuality or religious affiliation, that's the honest-to-God truth."

Bixby did note an affiliation to the nondenominational Universal Life Church, based in California. The open-mindedness of Universal Life makes it comforting for members of all faiths, he said, listing Jewish, Islamic, Catholic, Evangelical, and nominal Christians of all stripes among past customers.

Though privately owned, because it's a cemetery, it won't be taxed, a fact that rankles residents, who fear being left to pay for restoration of the land if the enterprise falters. Bixby contended that the business will set aside 15% of its monies placed into a perpetual care fund aimed at preservation of the land in perpetuity.

His business partner, Connell, explained the sandy soil is ideal for the planned manually dug graves. He expects to plant white pines along property lines, and bring an outhouse and shed to house tools onto the property.

Residents have expressed concerns about burial remains becoming unearthed by wild animals, threats to water, roadway parking, and even construction of a crematorium.

"That would not be green," Bixby said, dismissing the topic.

Water wells have been determined by the county to be sufficiently far enough away, the owners said, adding that they've applied to be governed by one of two state statutes related to cemeteries - one that does not allow for a cemetery to acquire more burial ground via eminent domain.

One of the residents in support of the cemetery, Barb Nichols, read a letter at the latest township meeting. It had been written by Connell in reaction to the latest round of residents' inquiries.

"We did our due diligence and are fully within our rights," Nichols read. "We ask only to be left to do our work on our land, quietly and peacefully."

At Tuesday's county board meeting, a handful of residents spoke again about the perceived intrusion. Notions of a moratorium or land swap were raised. County attorney Ketola explained a moratorium was not advisable based on case law, and reinforced that a cemetery is a permissible use of the land.

"I hear your concerns," Ketola said. "I'm trying to navigate this for you on a state level." 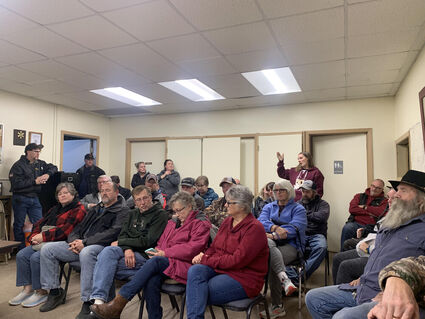 Jessica Paulson speaks during a meeting in Blackhoof Township on Wednesday, Oct. 19. Residents have opposed the arrival of a "green" cemetery in the township on Pioneer Road.

For township residents, some thoughts expressed recently suggest turning the page to making sure it doesn't happen again. They've pressed township and county officials about updating local zoning ordinances, and have sought more discussion with Sen. Jason Rarick, R-Pine City, who they say has been receptive to looking into state cemetery law.

"We cannot deny a property owner from exercising their rights on their property," Thell told the township audience last week.

For Connell, operating a green cemetery was an opportunity to step away from the rat race, he said.

"It was a dream of mine to really, truly do something that was impactful and helpful toward humanity," he said.

For his business partner, the matter has been familiar. Bixby said it was the third time he's opened a cemetery to some conflict.

"It's very inexpensive, and really is a wonderful way to celebrate a life that was lived," Bixby said. "This is how we've been burying people since the dawn of time. I haven't invented it."