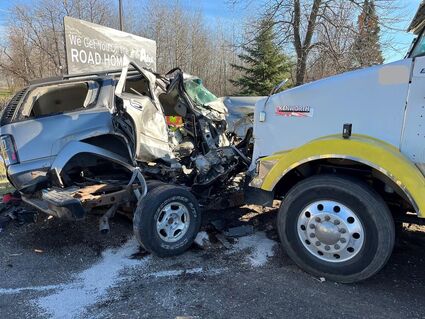 First responder recorded an image of the Tuesday crash.

A crash between a semi tractor trailer and Chevy Tahoe resulted in six occupants of the SUV sustaining injuries Tuesday afternoon in Scanlon.

The crash was near the intersection of Minnesota Highway 45 and the Interstate 35 southbound exit.

The occupants of the full-sized SUV had moderate to life-threatening injuries, according to the Cloquet Area Fire District.

Firefighters carried out an extensive auto extrication rescue to remove the people from the vehicle. The right-angle, or T-bone, crash struck on the passenger side, according to Fire District photos.

The Minnesota State Patrol incident report said the driver of the Tahoe - 21-year-old Leonard Tyrone Alexander of Brooklyn Center, Minnesota - was attempting to enter the southbound I-35 ramp by crossing the northbound lane of County Road 45 when it was struck by the northbound semi at 12:35 p.m. Tuesday.

Alexander was injured in the crash, as were his five passengers, also in their early 20s. No one in the SUV was wearing a seatbelt.

Mutual aid was requested and provided by Carlton Fire, Carlton Ambulance, and Mayo Clinic Ambulance. The injured were transported to St. Luke's and Essentia trauma centers in Duluth. The semi driver, 61-year-old Clyde Miller of Sandstone, was not injured.

Cloquet police also responded, along with deputies from the Carlton County Sheriff's Office, and troopers from the Minnesota State Patrol. Officers assisted the fire/rescue and ambulance personnel as they worked to extract the victims from the vehicle. Officers also directed and shut down traffic in the area so the crews could work safely.

Police chief Derek Randall was on the scene and said later that improving the layout of the intersection would not be simple, in response to public comments.

"Without major construction, I don't know how you could avoid something like this, other than not being distracted and following the rules of the road," he told the Pine Knot Wednesday, adding that the crash appeared to be a simple failure to yield by the SUV driver.

The crash response closed and diverted traffic on Highway 45 heading northbound into Cloquet for close to three hours Tuesday. Alcohol is not suspected as a factor in the crash.