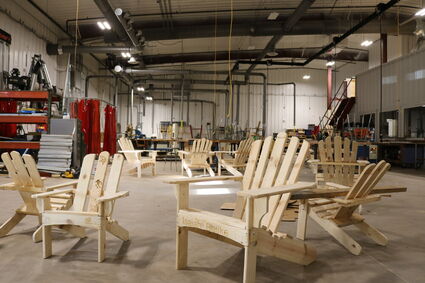 Lawn chairs made by eighth-graders in the beginning woodworking class appear in the foreground of the new shop inside Wrenshall School's renovated Career and Technical Education building. An open house of the building will be held 5-7 p.m. Nov. 10.

When Chris Gustafson arrived at Wrenshall School, his predecessor teaching industrial arts had quit after the district cut the teaching position to barely more than half-time.

"They realized if they were going to keep a shop teacher, they better offer a full-time position," Gustafson said, happy to have filled the job for the last 17 years.

In that time, Gustafson has seen the pendulum swing back toward training students for careers which don't always require four-year college degrees.

On Thursday, Nov. 10, Wrenshall School will hold an open house from 5 p.m. to 7 p.m., unveiling $2.1 million worth of renovations to what is now the school's Career and Technical Education building.

"It's an old building we repurposed," principal Michelle Blanchard said. "It used to be classroom space, then it was renovated into our second gym."

Blanchard and superintendent Kim Belcastro met the Pine Knot News to tour the building earlier this week. Vacuums from the new dust removal system hung over saws and equipment from tall ceilings, and the administrators showed off new classroom spaces. They toured CTE programs in Cloquet, Alexandria and Perham, Minnesota, as well as Webster, Wisconsin, during planning stages, determined to formalize a commitment to technical education at Wrenshall.

"It takes about 10 years to really flesh out a program like we're trying to do," Belcastro said. "But we've already started and are well on our way."

Fifth-grade teacher Kris Anderson is in the process of getting his CTE teaching license. During the Oct. 17 school board meeting he gave a presentation on the CTE program. He's expected to take over the business, marketing and entrepreneurship portions of the program next school year.

"It's a different direction education is going for," Anderson said, describing CTE as a sequence of courses designed to develop skills for a student to transition to college or straight into the workforce. A student might develop interest in architecture or engineering, or they might as easily join a trade union and enter into an apprenticeship program.

"We have a good relationship with them," Gustafson said.

Unlike vocational programs of high schools past, CTE programs offer a door to a range of skills, from hands-on experience with basic wiring or welding, to development of a business strategy.

"We're going to tie it all together," Anderson said. "We want to encompass a whole bunch of skills, because you never know when a kid is going to pick up on it and run with it."

Superintendent Belcastro noted how Gustafson's students already get project work around town, including building decks, garages and remodeling. It's conceivable the program could lead to students building houses.

"Ultimately, we would like to have a student-run business," Belcastro said. "That's what the final piece of this would be."

The floor space for the shop is five times what was offered by the old shop inside the school. That space is now being occupied by the building maintenance crew. The new shop features tools and equipment, some procured through grants and some donated by community members, including a band saw from school board member Jack Eudy, and steel storage shelving school board member Ben Johnson had donated from a previous employer. Other community members and private businesses have donated funding, including gifts up to $2,000.

Gustafson hopes to hear more from community members during the open house.

"I'm not too proud to look for input," the industrial arts teacher said. "It's kind of a blank slate right now, but we have a good direction."

The CTE program is ripe to team up with community members, who are sought to volunteer and even teach adjunct-style. Sources would like to get an agricultural component built into the program, allowing them to tap into expertise from throughout the agribusiness economy thriving in Wrenshall.

"Local collaborations can connect with people who have already done this before," Anderson said.

He also talked about bringing a personal finance component into the program.

"When they leave school, a lot of kids run into trouble with basic finance," Anderson said. "They're naive until they get into how the workplace goes, how life goes, and the responsibilities that come along." 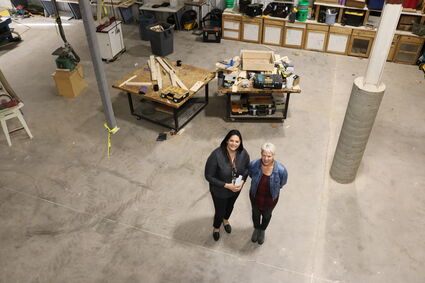 Superintendent Kim Belcastro, right, and principal Michelle Blanchard stand inside the new shop. The school is developing a career and technical education program they hope culminates with a student-run business.

Rebuilt as the final phase in a three-year, $13.5-million facilities improvement program, the new CTE building is designed to be used alongside other programs, such as College in the Schools, which yields college credits for students.

Belcastro noted how families have taken notice of how trades are attracting a new generation.

"Students are realizing, 'Wow, I could make more money if I go this route over the college route' - and it's a shorter route," she said. "Parents see that, too."

It helps to have instructors like Gustafson and Anderson at the core. They're enthusiastic and ready to build a new era at the school. Even if, as with any project, it comes with hiccups and a need to reassess from time to time.

Anderson accepted there will be failures along the way.

"Now is the time for kids to fail," he said. "This is a good time for them to fail, and learn how to improve from that."