They're back: Esko rolls to final 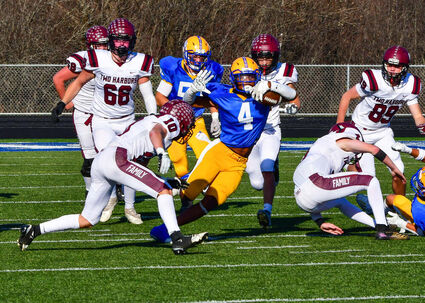 While being a football quarterback bestows extra expectations, the weight of the position doesn't faze Ty Christensen. Literally.

When the Esko senior shouldered the hardest of defeats last November - leaving the Eskomos one win shy of a Prep Bowl appearance - the signal-caller didn't need long to get in the weight room with his teammates.

"The day after," said Christensen, who put on over 30 pounds of muscle to his now chiseled 5-foot-10-inch, 185-pound frame in the offseason, "we wanted to be bigger, faster, stronger and have more of an impact. We wanted that upper hand and that strength that other teams don't have."

Esko (10-0) has a lot of things other teams don't have, including a perfect record and No. 1 state ranking in Class AAA. The Eskomos offense is overwhelming, scoring 52 points per game, while their defense is derailing, allowing a minuscule 3-points-per-game average. Their linemen are lightning-quick, special teams torrid and athletes aplenty.

"They are a talented group," said Two Harbors coach Tom Nelson, his Agates the latest Eskomos' victims in a 43-7 Section 7AAA semifinal loss Saturday, Oct. 29 in Esko. "They have speed, strength and size."

"We're really feeling great," said Christensen, who ran for a touchdown himself against Two Harbors and heaved a 34-yard TD toss to one of his favorite targets, Koi Perich.

Perich, a dynamic 6-foot-1-inch, 185-pound junior, ran for 144 yards on four carries against the Agates, toting touchdown carries of 59 and 65 yards. His backfield mate, senior Nolan Witt, plowed his way into the end zone from 25 yards out, in a game that was never in doubt.

The hard-to-defend triple-option offense, and a defense that will "fly around," accordingly to Nelson, begins with the Eskomos' electric speed. A handful of two-way offensive, defensive and even special teams athletes average 40-yard dash times in under 5 seconds.

Perich, the fastest, at 4.52 seconds, is a blur when he touches the ball. He tore down the sidelines against the Agates during his runs, and added two acrobatic interceptions. Esko teammates Javontae Gregory, Joey Antonutti, Carter Zezulka, Wyatt Hudspith, Christensen, and Witt are all athletic, too.

"We have so many weapons," said Antonutti, a 5-foot-11-inch, 200-pound two-way linebacker and playmaker.

"That is a luxury," added an honest Esko coach Scott Arntson, now in his seventh season.

Yet, it's Perich who was quick to deflect the praise to their dual-threat linemen, playing on both sides of the ball, all game long, like many Eskomos do. And not only are they bruising up front, they exhibit quick feet.

"I think we have the fastest linemen in the state," said Perich. "Those guys are a two-way package that gets after it. It all starts up front."

Christensen said that stems from their weight-room dedication following their 21-14 Class AAA state semifinal loss to eventual champion Dassel-Cokato a year ago, when the Eskomos were oh, so close to the state title game. Since then, whether winter, spring, summer or fall, it's been pumping iron.

"It's definitely a second home to us," Christensen said of the weight room.

Meanwhile, if top-seeded Esko wants to make a second straight state tournament appearance, it'll need to defend its 7AAA crown against pass-friendly Pequot Lakes (8-2) starting at 7 p.m. Thursday, Nov. 3, at Malosky Stadium on the campus of Minnesota-Duluth, after this issue of the Pine Knot went to press.

The Patriots pass as much as any school statewide, led by decorated quarterback Grant Loge, who has thrown for 32 touchdowns to just six interceptions on the season. Loge averages 225 yards passing per game and has tallied more than 2,000 yards via the air this fall.

"He's going to get his completions, but it's just a matter of limiting the big plays," Arntson said.

While the Patriots - scoring 41 points per game - will be the tallest test yet for the Eskomos, the boys in blue and gold are confident but not overlooking the task in front of them.

"Coach always says the only play that matters is the next one," said Christensen. "It's one play at a time."

Antonutti agreed, noting this week of practice has been some of their best.

"We're all dialed in and everyone is going full-speed, every play," Antonutti said. "Sometimes we talk about how far we can go, but we can't win a state championship without beating Pequot on Thursday." 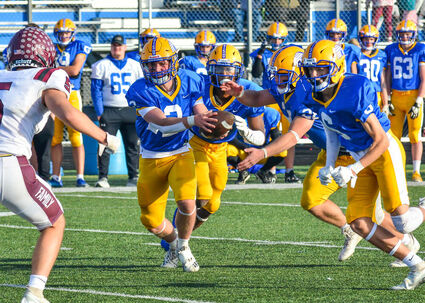 Esko quarterback Ty Christensen hands off to Nolan Witt during Saturday afternoon's section semifinal game against Two Harbors. Esko ran over the Agates in a 43-7 win.

It's that championship that keeps the Eskomos hungry and relentless, whether tearing up the field, or wearing down the weight room.

"They've done everything I've asked of them," said Arntson. "It's their hard work that has put them in the position they're at now."

Barnum got a mild upset in the Section 7A semifinals last week by defeating No. 2 Braham 28-18. The Bombers, the No. 3 seed, will meet top-seed Deer River in the section final game Friday, Nov. 4, at

Moose Lake/Willow River flexed its top-seed muscle in Section 7AA, getting a 47-8 win over Hinckley-Finlayson last week to reach the final, scheduled for 6 p.m. Thursday in Esko. The Rebels were set to meet No. 2 Crosby-Ironton.