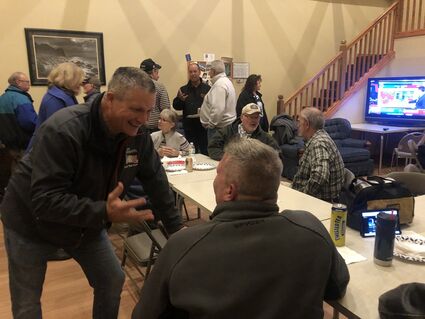 House District 11A candidate Jeff Dotseth makes a stop at the Republican headquarters in the Knights of Columbus building on Avenue C in Cloquet on Tuesday. Dotseth won the election.

In dribs and drabs, and sometimes huge rushes, throughout the wee hours of Wednesday morning, the results in the District 11A state house race came in. In the end, Republican Jeff Dotseth's third try at the seat proved successful as he won the district by 454 votes over Pete Radosevich, the DFL-backed candidate. Both were trying to replace Esko's Mike Sundin, who did not seek a sixth term representing Carlton County and adjoining townships in Pine and St. Louis counties.

Dotseth, from Kettle River, had edged closer to upsetting Sundin in his previous biennial bids. When he found out Wednesday that he had won, he admitted it was "numbing."

The vote margin was narrow, and Dotseth said he wishes he had won a larger majority of voters. As it stood on Wednesday, he had taken 51.2% of the vote to Radosevich's 48.7%.

Dotseth credited a good ground game in the district.

"It was a team effort, a real grassroots group," he said.

Radosevich, a Cloquet resident who said he will definitely run again in 2024, said his message that he would be a representative for everyone in the district must not have resonated enough. In picking through the precincts, he saw a vote that mirrors much of the country today, a vote based on party and not what a candidate might have to offer.

"There were those voting strictly for a Democrat or a Republican," Radosevich said. "It was too much to break through."

Radosevich said Dotseth did well in the more rural areas of the district. Dotseth won the Carlton County vote by 209 votes, taking 25 of the precincts in the county to Radosevich's 12. Dotseth also did well in Pine County, taking 11 of its 13 precincts and adding 327 votes to his lead. Radosevich picked up 82 votes over Dotseth in the five St. Louis County precincts. Radosevich was strong in Cloquet precincts, winning the city by 521 votes. But the balance of the vote in the more rural areas of the county made those gains moot.

The two men spoke to each other on Wednesday, with Radosevich saying Dotseth was gracious.

Radosevich said he hopes his opponent will keep the door to his new office open for everyone. "It's critical to represent the district and not the party," he said.

Dotseth said he saw much on the campaign trail and has gained the sense that "people are looking for fresh things" beyond political polarization. He said people want to feel like they are being heard.

"People are really hurting," Dotseth said, reeling off gas prices, inflation and crime as issues people want him to work on. He also said he will work hard to make sure state money is fairly appropriated to the district. 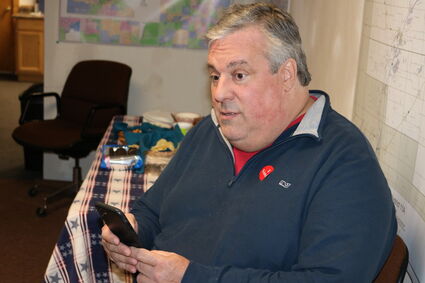 Only a block away, House District 11A candidate Pete Radosevich checks his phone for election results Tuesday night. Final results didn't come in until after 3 a.m. due to delays in other counties.

But there is a balancing act, he said, because people also want "less government, less overreach. Small businesses want to be left alone."

He said he will try to build a coalition among members of both parties in St. Paul, especially ones who will fight for areas outside of the Twin Cities metro influence. He said the district needs money to fight crime, fix roads, plus support the Carlton County Justice Center and fire districts.

As he was picking up lawn signs Wednesday afternoon and speaking on a cell phone, Dotseth paused a beat to think about the half-dozen years he's spent trying to get the 11A seat.

"I finally hit that benchmark," he said.

Editor's note: Radosevich is the publisher and co-owner of the Pine Knot News.