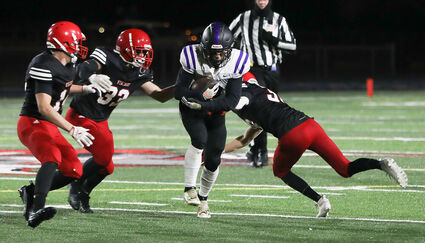 After upsetting the top team in the section last week, the Cloquet football team came back down to earth Friday against North Branch. The Vikings played a more physical game and slammed their way to a 34-6 victory in the Section 7AAAA championship game in North Branch.

"I thought when we played them in the regular season that our line play matched them," Cloquet coach Jeff Ojanen said. "This time they just were more physical in their overall game, and that was the difference."

North Branch ran 20 more plays from the line of scrimmage and pounded out 417 yards rushing as the Lumberjacks struggled to contain Loghan Croal and Vincent Boeck, who finished with 171 and 177 yards, respectively.

"They run out of a power T formation with double tight ends and a full house backfield," Ojanen said. "They come right at you and keep coming at you."

After a scoreless first quarter, Croal plowed into the end zone with 8 minutes, 24 seconds remaining in the second quarter, making it 6-0 after the missed extra point. With 5:56 left in the first half, quarterback Preston Peterson slashed into the end zone on a 36-yard touchdown romp. The Vikings tacked on the 2-point conversion run to push the lead to 14-0 at halftime.

Cloquet dug into the trenches early in the second half, but a late third-quarter passing score by Croal to Peterson covering 16 yards pushed the lead to 21-0 after the extra-point kick, making a 'Jacks comeback improbable.

"The guys never stopped playing hard," Ojanen said. "I was proud of our seniors and how they led. They played hard until the end and they didn't quit."

The 'Jacks struggled to hang on to the ball throughout, losing three fumbles in the game.

"It is always tough to overcome those types of things," Ojanen said. "Those things happen, but when you have two or three in a game that makes it very difficult to overcome."

Boeck scored back-to-back touchdowns to start off the fourth quarter, making runs of 68 and 25 yards as the Vikings built a 34-0 lead.

Cloquet finally broke the ice with 4:27 remaining in the game on a 54-yard touchdown pass from Reese Sheldon to Kollin Bonneville for the final score, 34-6.

"I am proud of how the guys kept growing and getting better all year," Ojanen said. "Even after we lost games, the guys kept coming back and putting in the work and kept a positive attitude."

Ojanen's team finished 7-4 in his first season as head coach after serving as defensive coordinator for several years. The team peaked with its 42-15 win over top-seeded Grand Rapids in the section semifinals. 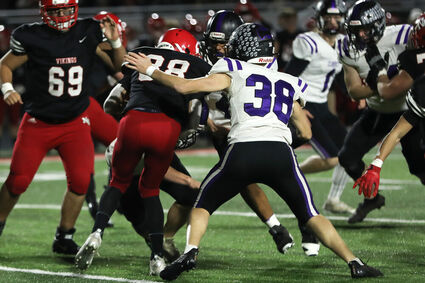 "The kids grew and the coaching staff grew," Ojanen said. "All the coaches had to learn new roles and the team and coaches all grew together. I am proud of that."

Sheldon led the 'Jacks with nine carries for 62 yards and Bonneville added 58 rushing yards on 10 carries. The Vikings finished with 433 total yards and Cloquet had 221 total yards of offense.

"I am not disappointed at all in the loss," Ojanen said. "I thought North Branch played its best game of the year."

The defeat was the second of the season to North Branch, which also beat Cloquet 40-27 during the regular season.

"We lost to Grand Rapids, Hermantown and North Branch in the regular season and the team didn't let it affect them," Ojanen said. "I am so proud of the playoff run they had and I told them after the game they should be proud of their accomplishment."